A sitcom (with laugh track) about four scientists and their hot neighbour.
I’m still enjoying this show very much. I don’t understand why they broke Penny and Leonard up (especially because it felt like one of the most normal relationships on TV) but at least they didn’t put any bad blood between them.

Forensic anthropologist Dr. Temperance “Bones” Brennan and FBI Special Agent Seeley Booth investigate murders where only a skeleton is left of the victim.
Quite a few episodes of this season where just “OK” but it’s still watch-worthy and I assume that next season will have a totally new dynamic due to the “time leap”.

Michael Westen is a former spy who has been “expelled”. He now works as a “problem solver” for people whom the police can’t help.
It’s a good show but I hope that one day they’ll drop the whole “I want to go back to the spy game” aspect of it and just run with the main plot.

Richard Castle is a best-selling thriller author who solves crimes with Detective Kate Beckett who has become his inspiration for his novel heroine “Nikki Heat”.
They are only in their second year and both characters already know they have feelings for each other. Progress! While the WTWT is certainly an aspect of the show that can’t be ignored, I tune in because of the crimes they have to solve and the ways they do it. For me, it’s the unofficial sequel to Murder She Wrote.

A guy who works in an electronics superstore get all the secrets of the government uploaded into his brain. From now on he works as a spy and helps to put the members of the most dangerous organisations behind bars.
I enjoyed the first third of the third season but then disliked where the show was going with Shaw and Sarah. Not because I’m a Charah shipper (I am that, too ;)) but because it didn’t feel real that Sarah would tell Shaw (who just came into her life) things, she didn’t share with Chuck. But now the show is great again, and I can’t wait to see the finale and the fourth season.

A show about a lot of spoiled rich kids in New York’s Upper East Side and some “normals” who get caught up in the whole mess.
It took them a while to make the transition from high school to university, but they managed to do it. Bonus points for not having all the characters attend the same university (University of California in Sunnydale or Central Kansas A&M University in or near Smallville ;)).

Specialist for Diagnostic Medicine Dr. House leads a team of doctors that take care of patients that have rare or inexplicable symptoms and try to help them.
It’s still very formulaic but every year is still different. This year House actually tried to be a better person. That doesn’t mean he stops playing games but now they are means to a different end. And next year will be different, too. I’m watching it because House can still surprise you.

How I Met Your Mother 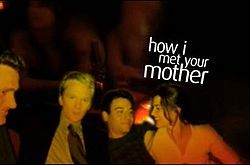 Ted tells his kids the story of how he met her mother. For that he’s going into greater detail about his early life.
The show as a whole is declining. The search for the mother has been put on hold for a while now and it isn’t as much fun as in the beginning. There are still good episodes in it but as a whole it’s getting more generic.

If Burn Notice is the unofficial sequel of MacGyver and Knight Rider, this is the unofficial sequel to The A-Team. A group of con (wo)men who live somewhat outside the law try to help people.
I loved these kinds of shows in the 80s and should I stumble across an episode of The A-Team on TV, I’ll still watch it. And I watch this show for the same reasons. And Jeri Ryan (7 of 9 in Star Trek VOY) was a nice addition to the show this year.

The myth behind this show is relatively unknown. It’s about an illegal immigrant who hides on a farm in Kansas. That is, when he’s not out in Metropolis and commits crimes of manhandling, B&E and malicious mischief while running around in a T-Shirt with a stylized “S” on it.
I really didn’t like seasons seven and eight. But this year was really good again and I’m looking forward to its tenth and last season.

Vampires are real. And they live amongst us. And they want the same rights we have.
The second season was even more explicit than the first one was. I did not really care about the plot about the Pagan Goddess but that was just one aspect and I will tune in for the third season.

Two and a Half Men

A sitcom (with laugh track) about a man in his forties who lives in a beach house with his brother and his nephew.
It’s the same kind of humour this show had from the beginning but after seven years there are only so many jokes you can make about the same subject. I still enjoy it, but it’s not a priority anymore.