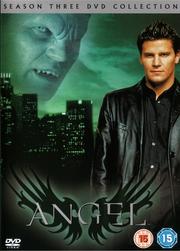 Synopsis: Angel skips about the same time as Buffy did. Buffy has been dead for three months and Angel has been mourning in a monastery in Sri Lanka for about the same time. Now he’s back and on his first hunt he kills an acquainted vampire before he recognizes her. But he also knows her boyfriend James and he wants vengeance.

My Opinion: On one hand I find it a pity that they jumped over these three months, on the other hand we would have only seen a broody and solitary Angel. The episode itself wasn’t that interesting and a bit weak for a season opener.

Synopsis: Cordelia now gets visions that physically hurt her and several of it in a very short span of time. It is unclear why the “Powers That Be” would suddenly hurt Cordelia but Angel does anything in his powers to quickly finish the assignments.

My Opinion: I am quite interested in that prisoner. He could be a formidable enemy or we could never see him again, both is possible in Angel. If it was not settled until now, now it’s clear that it is a bad idea to try to blackmail Angel.

That Old Gang of Mine

Synopsis: A number of demons are arbitrarily killed and there is no pattern to be seen. Some of them are dangerous, some of them are totally harmless. As it turns out, Gunn’s old gang is somehow involved in this.

My Opinion: I think it’s historic irony that a group of black people tells other living beings that they don’t belong here, that they have no right to live. Granted, demons are indeed no humans but blacks also were told that they were less worthy. The world is grey, it’s not black/white and neither is it separable into good/evil.

Synopsis: Angel and the gang investigate in a case were a number of men mysteriously died. Everything points to a certain gym – or to the building opposite of it.

My Opinion: I love body-switch episodes. They are always fun because the actors can behave in a way which their usual role doesn’t allow. It’s also nice to see the confusion that comes out of such switches. The best body-switch episode I’ve ever seen was a Farscape episode.

Synopsis: After Fred’s parents have found her in Angel’s hotel, she runs head over heels. Angel and her parents – who are oblivious to supernatural phenomena – try to find Fred. And of course they cross path with monsters.

My Opinion: Finally Fred has come out of her self-imprisonment, it couldn’t have gone on like this. And I seriously liked the attitude of the parents.

Synopsis: The man who Angel freed from the demon prison is at large and he uses his evil powers. Both Angel and Cordelia feel obliged to stop him.

My Opinion: That was quick. It’s good that Lilah shot the bastard but that shortens the list of possible Angel enemies.

Synopsis: Darla is very advanced in her pregnancy and she makes an impact at Angel’s hotel. Neither Darla, nor Angel nor Wolfram & Hart (who of course learn of her pregnancy) know how it’s possible that a vampire becomes pregnant. And Angel’s friends are very disappointed that he lied to them.

My Opinion: Cordelia has gotten her maternal instincts in the very wrong moment. I didn’t understand her behaviour from the beginning. Hopefully this story with his son and the vampire hunter is a longer arc.

Synopsis: Darla has gone into labour and the gang gets her into a normal hospital. But several different groups have an elaborated interest in getting their hands on both Darla and the child, among them W&H, a vampire cult and the vampire hunter Holtz, who has been ressurected by a demon.

My Opinion: Chosen children never had an easy life, we’ve seen this on Xena, on Star Wars and it will be no different here. Holtz is obviously stronger than normal men but I get the suspicion that their struggle won’t last long because Holtz won’t stop hunting Darla/Angel and Angel won’t hide from Holtz. I supect that the main plot of the next episodes will be to protect the child. This episode was a good appetizer for that.

Synopsis: Angel is confronted by Holtz who manages to trap Angel for a short time. But then Lilah bursts in and unwittingly explains to Holtz that Angel has a soul now. In the meantime Darla’s water is broken but she seems to be unable to give birth to the child.

My Opinion: Will Lorne’s bar ever be re-opened? The episode was OK as an episode of transition.

Synopsis: As predicted, several groups are after the newborn child and Angel has to care for his son as a single parent. The others offer their help but Angel seems unwilling to accept it.

My Opinion: How suddenly the world changes when one becomes a father. It’s also funny to see how adult people resort to baby babbling. And I like the name Connor.

Synopsis: Cordelia gets once again a vision but this time she falls into a coma and awakes in an astral body beside her own. The demon Skip explains to her that a human body isn’t strong enough to get the visions of the “Powers That Be” for a longer period of time. He gives her a choice, to die or to never have met Angel in L.A..

My Opinion: A “What if” episode. Cordelia has certainly come a long way since her days in Sunnydale or the beginning of Angel. If you think back of how she despised demons. Not even Doyle dared to open up to her. That makes the step she took even bigger. But I seriously hope that there aren’t too many side effects to this.

Synopsis: For the first time in his live, Angel has to care for someone, someone that fully depends on him. This responsibility weighs heavy on him and because of this he tries to get new profitable jobs for the agency.

My Opinion: One has rarely seen that Angel handled earthly things and now he has to think about health care and college funds. It was fun to see him complaining about unpaid bills while he was staking vampires.

Waiting in the Wings

Synopsis: Angel and the gang are going to the ballet, in a performance which Angel has seen before, in 1890. But something is strangely familiar. The actors are the very same(!) as a hundred years ago.

My Opinion: I am torn regarding the relationship between Angel and Cordelia. On the one hand I’d really like to see them together but on the other hand I know it won’t happen because of the curse. But Wesley clearly hesitates too much and thus it’s partly his own fault.

Synopsis: The Groosalugg (Cordelia’s friend from Pylea) has come to L.A., because he has been cast out of Pylea. Cordelia is of course pleased to see him. In the meantime, Gunn and Fred are going together on a job.

My Opinion: Two relationships and two that are shut out. And both are noble enough the let the others go. As if this would be that easy. But I expect that Angel and Wesley will be soon distracted because of the translated prophecy: “The Father will kill the Son.”.

Synopsis: To study their fighting techniques, Gunn and Fred are lured into a trap, into which they walk – but both can fight their way out of it. Wesley on the other hand fears for the life of Connor and he seeks the advice of Loa. But Loa only confirms his fears.

My Opinion: A talking plastic hamburger! When I saw that I had a positive reminiscence of a certain Marshmallow Man from Ghostbusters. But I can’t imagine that Angel would hurt Connor even if he knew that the cild would bring the end of the world. It remains the question of what Wesley is going to do, but I will know this evening.

Synopsis: The fight for Connor reaches a climax. Wesley kidnaps the boy to protect him but Holtz as well as Wolfram & Hart want him – alive. Sahjhan on the other hand wants him to be dead.

My Opinion: That Holtz would kidnap the child came unexpected – I love this unpredictability. But Wesley looked rather dead and the episode when Buffy’s mother died ended similar. 🙁

Synopsis: Angel tries everything in his power to open a portal into the hell dimension Quor’Toth, to get his son back. And for this he would stop short before nothing.

My Opinion: Phew, Wesley is not dead – yet. But he and Angel don’t have anything to say to each other for quite some time. My assumption is that the Holtz/Sahjhan arc is over for now.

Synopsis: Cordelia returns from her vacation but everything has changed. And then there is a certain boss of a casino who wants to collect a soul that was promised to him quite some time ago.

My Opinion: This episode was ok, but I had the feeling that it was a filler. The story was complete in itself, they haven’t continued old stories and haven’t begun new ones.

Synopsis: The dark magics Angel used to make Sahjhan solid had unexpected side effects. A swarm of very thirsty creatures tries to break out of the hotel to find water.

My Opinion: There’s the new arc (I presume). Conner is back and he has grown a “little”. When I saw this I was remined of Hope in Xena. But what else could they have done with the baby… But except for the last third the story was only average.

Synopsis: Connor has found a way back into this world but now he is a teenager under the name of Steven, a name Holtz gave him. Now he tries to find his way through this new world.

My Opinion: They screwed up with the fighting logic in this one and I simply can’t let go of something like this. First Connor/Steven fights against Angel, Groo and Gunn and he doesn’t look overburdened. Then he jumps off a bridge, 20, maybe 30 meters into the deep. But shortly after that he has a problem to handle four muggers from the streets. Such a thing rankles me over an entire episode.

Synopsis: Holtz has also returned into our dimension and Steven regards him as his real father. But Holtz sends Steven to Angel, to learn from him.

My Opinion: Even in dying Holtz is still perfidious. In any case, father and son fight very well together – yet I fail to understand why they’ve change the camera work (e.g. bullet-time) in the middle of the series.

Synopsis: Steven has only ostensibly returned to his father because he assumes that Angel has killed Holtz. Lorne doesn’t trus Connor/Steven and has also taken a job in another city. Groo leaves Cordelia because he sees that she loves Angel. And Cordelia and Angel want to admit to each other that they love one another.

My Opinion: Wow. This group has fallen apart. Not only are they scatterd into all horizontal directions but also into heaven and hell. Cordelia’s ascension into another plane of existence strongly reminded me of Daniel Jackson in Stargate SG-1‘s fifth (sixth?) season. If they are remotely similar then we won’t have seen the last of her.

The Season – My Opinion: This season was like a roller coaster. Darla returns pregnant. Holtz hunts them. Connor is “born”. Connor is lost in a hell dimension and returns. And in the middle of it is always Wolfram & Hart. Yes, that was exciting.