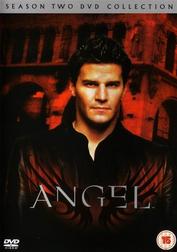 Synopsis: After Angel accidentally killed the demon bodyguard of a young, pregnant woman he feels obliged to take his role. But the young woman wants nothing to do with hin. On the other hand she needs a champion for the tribunal she has to face.

My Opinion: Karaoke, I love karaoke. 🙂 It was simply cute to see Angel croaking on that stage. And the jousting on the middle of the main road: great idea. I liked that episode.

Are You Now, Or Have You Ever Been?

Synopsis: Something strange happened in the long-closed Hyperion Hotel. Angel has lived there in the 1950s and something is pulling him back there.

My Opinion: We have seen it in the first season due to Angel’s age we are able to see flashbacks into former times and thus connect the past and the present. I’ve always liked that in Highlander and I did like it here, too.

Synopsis: Cordelia gets a vision of Gunn being in mortal danger, but she can’t reach neither Angel nor Wesley. Because Angel has sweet dreams about Darla.

My Opinion: It looks like Darla is indeed becoming the season enemy and I think that could become very interesting. After all, Angel was the best enemy Buffy ever had.

Synopsis: A young woman has extreme telekinetic abilities when she feels herself endangered. Angel tries to help but Wolfram & Hart has also an elaborated interest in her.

My Opinion: The Darla plot continues. But Angel is able to rain on the lawyer’s parade. What I did notice (again) was the fact that in Angel much more humans get killed (I mean the humans that get killed by the good guys) than in Buffy. Granted they are all bad guys but I noticed it anyway.

Synopsis: Angel runs into Darla “by coincidence” outside of his dreams. But she denies to be this “Darla” person. She even has a husband and can walk into the sunlight. But Angel is quite sure he has the right person in front of him.

My Opinion: Darla is a human again. This could be getting really interesting with her having a soul. And now we’ve met Drusilla in the past I think it’s only a matter of episodes until Spike, I mean William the Bloody, also makes an appearance.

Guise Will Be Guise

Synopsis: Angel seeks for the help of Swami T’ish Magev who was recommended to him by Lorne (the host of the karaoke bar) to discuss his Darla-issue. With Angel being absent Wesley asumes the role of Angel without thinking and gets hired as a bodyguard.

My Opinion: Very funny! Wesley as a vampire and he did all the things a vampire couldn’t have done. But it also showed that Wesley has aquired some decent fighting skills.

Synopsis: Darla – like Angel – has a problem with having a soul again. We see a lot of flashbacks into the past from before and after Angel got his soul back. Additionally she begs Angel to make her a vampire again.

My Opinion: The Darla plot has taken an unexpected turn. In the beginning I thought that she would be his enemy but I don’t see how that would be possible anymore. Sadly, Spike didn’t got more screen time but the episode wasn’t about him after all. I nonetheless liked the fact that they involved the time when Spike killed his first Slayer. Things like this make a fictional universe more whole.

The Shroud of Rahmon

Synopsis: Gunn asks Angel for help because his cousing has gotten into a thing that is getting over his head. Thus Angel helps to rob the “Shroud of Rahmon”, a shroud that drives people insane.

My Opinion: I seriously hope that Kate gets over her animosity against Angel. I think the reason why Angel could at least partly escape the effects of the shraud is because he has been fighting his inner demon for more than a century.

Synopsis: As it turns out, Darla has the same illness that she had before she became a vampire. And she will die from it – within the next months. Angel tries anything in his power to prevent that – except for making her a vampire again.

My Opinion: Full circle. Darla sired Angel. Angel sired Drusilla. And now did Drusilla sire Darla. I liked the tests (they had an Indiana Jones touch), but I’m asking myself what kind of guys did try it before Angel, because the first guy didn’t really looked unbeatable.

Synopsis: Cry havoc and let slip the dogs of war! Angel couldn’t prevent the rising of Darla. Dru and Darla waltz through the city and leave a trail of blood and they do a massacre – just like Wolfram & Hart wanted them to do.

My Opinion: This episode totally proves the point I made earlier. Angel has let these people die – willingly, when he could have saved them. Let’s see how that develops.

Synopsis: Angel fires Cordelia, Wesley and Gunn and goes on a hunt for his “relatives”. In the meantime the three try to do what is supposed to be Angel’s job: help the helpless.

My Opinion: Angel can be a badass even without being Angelus. But being on a campaign of vengeance has such results. But it is exciting to watch him.

Synopsis: Angel tries to find out how a youth shelter is connected to Wolfram & Hart. As it turns out, W&H is hosting a charity party for the shelter, but they intend to keep a great deal of the collected money for themselves.

My Opinion: Nice trap that Lindsey walked into. And I, too, think the question is important: How ethical is it to take money from dubious sources and use it for god purposes. At least in this case the money is “clean” because W&H couldn’t take any of it.

Synopsis: A young physicist works on a formula that can “freeze time”. But he has – without his knowledge – help from demons who have other plans with that invention.

My Opinion: What bugged me in this episode – or rather in Angel in general – is the mingling of demon world and human world. The demons are so obvious that nobody should be surprised anymore that they exist. Sunnydale was directly over a hellmouth but even there the humans had their bar and the demons had another. There hasn’t been a demon that walks into a human bar and the barkeep says that he usually serves only vampires disguised as humans.

Synopsis: Angel and the other work separately on the same case: A group of cops is out there who arrest and beat up youths with no obvious reason. And they even keep talking after they got beheaded.

My Opinion: There’s nothing better than a nice group of zombies. But it is obvious again that good intentions don’t necessarily result in good deeds.

Synopsis: Angel learns that one of the senior partners of W&H plans to visit the firm. But this “senior partner” is a demon from a hell dimension. Angel plans to kill him and the other partners.

My Opinion: This episode was really depressing, especially the end and the lift to the “home office”.

Synopsis: After Angel has slept with Darla it becomes clear that he hasn’t lost his soul and he has got an epiphany. It is now obvious to him which road he has gone down and why. It also becomes obvious to him that he can’t go any further this way. But it will be hard to return to his friends because they will soon be dead.

My Opinion: Can’t Angel have normal sex like everyone else? 😉 At least he has left his warpath. And it seems that the makers of Angel actually don’t intend to create a season enemy and to defeat him in the end. But I like that, it makes it more unpredictable.

Synopsis: Harmony (who was turned into a vampire in Sunnydale) comes to L.A., to visit Cordelia. While she is staying Cordelia gets a vision of a vampire cult that is growing in numbers.

My Opinion: A very good fun episode with many moments where I had to laugh. It’s good to see such an episode once in a while.

Synopsis: Wolfram & Hart gives Lindsey a new human hand. But something is wrong with it. The hand has a life of its own and Lindsey tries to find out where this hand came from. During his investigation he runs across Angel.

My Opinion: Lindsey seems to leave L.A.. Let’s see if this is permanent, I am not yet willing to believe that. I also wouldn’t like it because I think he is a good enemy.

Synopsis: After Cordelia got a vision she accidentally opens a portal and pulls a demon into our dimension. But this demon is a cousin of Lorne’s. He helps the three to hunt down another demon that came through a similar portal. Gunn on the other hand has to pay his last respects to a good friend.

My Opinion: It’s hard to have to choose between two groups, I know the feeling and it’s a total lose-lose situation. But now I have to continue watching, I want to know where Cordelia went.

Synopsis: Cordelia was sucked into the home dimension of Lorne’s, to Pylea. Humans are being held as slaves there and are the lowest of all creatures. Cordelia also finds herself in the position of being sold as a slave. But Angel and the gang find a way to Pylea but they can’t be of any real help to her.

My Opinion: Interesting change. Nature and daylight. Definitively different than the usual metropolis and night. And Cordelia as a princess, that has to get funny.

Through the Looking Glass

Synopsis: The group gets more or less voluntarily separated, after the princess has annulled the death sentences. Lorne and Angel are going to Lorne’s village and Gunn and Wesley can escape though a tunnel. Only Cordelia has to stay behind to fulfill her role as princess.

My Opinion: There was no doubt that the young girl would be Winifred “Fred”, but Angel as a full-grown demon was really cool. IMHO, to kill Lorne was a bad idea.

Synopsis: Lorne isn’t as dead as it looked like. However the entire gang is in mortal danger because killers were sent after them and Cordelia will also die if the high priest wishes it.

My Opinion: That’s the main advantage of watching-TV-shows-on-DVD, you don’t have to wait another week to see how it continues. I really liked this three-parter because it really was a change, in matters of story as well as location. But the moment Angel walked happily into the hotel I knew they would bring the end of the fifth season of Buffy into it.

The Season – My Opinion: I liked this season way better than the first one. It wasn’t what I expected but maybe that’s the reason. Maybe I was to hard in my evaluation of the first because I compared it to much to a Buffy season.