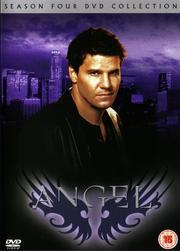 Synopsis: Cordelia and Angel have vanished from the face of the Earth, Lorne is in Las Vegas, Wesley has a life of his own now. Three month have passed and Gunn and Fred try to keep the business running and to care for Connor. But they have never given up the search for their friends – neither has Wesley.

My Opinion: I really like the dark Wesley much more than the duffer he was back in Buffy and in the beginning of Angel. That Angel would be found was obvious. At first I thought he would need some time to recover but they’ve found a nice way to remind us that he has spend a century in a hell dimension between the Buffy seasons 2 and 3.

Synopsis: To find Cordelia, Angel plans to steal the “Axis of Pythia”, a mystical object to find a soul no matter what dimension it is in. Gunn and Fred are of course helping. But there is another player involved who wants the Axis.

My Opinion: She looked like as if she’d belong to Magneto’s group rather than Xavier’s. 😉 I liked it.

Synopsis: Angel decides to go to Las Vegas to visit Lorne and to convince him to return to L.A.. Unfortunately Lorne has got an offer he couldn’t reject and soon Angel finds himself irresistibly attrected to the slot machines.

My Opinion: Angel is a Blues Brother! He puts the band back together! Only Wesley is missing but I have the feeling that it still may take a while before he comes back. It was an interesting list of people that Angel claimed to have met. And Andy Hallett’s (Lorne) singing was gorgeous again.

Synopsis: Cordelia is back, but she has amnesia. She has no idea who or what Angel is or who she is. The gang cautiously tries to re-awaken the memories without going like a bull at a gate. Wolfram & Hart also learn of her return.

My Opinion: It was a lose-lose situation. If they would have been upfront I presume she would have run screaming. Let’s see what Connor’s plans for Cordelia are. I don’t trust him and I have the suspicion that he’ll do something to hurt Angel. Wesley blew it once again but as I said I like him as an outsider.

Synopsis: Fred has returned to her work on physics and she has written an article that has been published. Now she is supposed to talk on a science conference where she meets her old professor.

My Opinion: Damn! I would have bet that there would be a plot twist and that the assistant is the true villain. Even though I haven’t predicted the end, that makes the story weaker, because it was so straightforward.

Synopsis: To return Cordelia’s memories, Lorne gets hold of a potion. They conduct a certain ceremony. Unfortunately now everyone has lost his/her memories.

Synopsis: Cordelia sees the apocalypse coming but it’s not the apocalypse that Wolfram & Hart is planning. She and Connor run right into the demon who happens to appear in the very same alley Connor was “born”. The gang, including Wesley try to kill the demon.

My Opinion: Cordelia, why? Can one break the heart of a vampire even if it doesn’t beat anymore? It certainly looked that way. I like the new demon, it’s bound to become interesting.

Synopsis: The gang has to regroup after they’ve lost the last battle. And this time their attack leads directly into the heart of evil, Wolfram & Hart.

My Opinion: “So I will walk through the fire, cos where else can I turn?” Granted, Buffy sang this in Once More, With Feeling but I am sure Angel feels the same way now. While I really like the new demon because we/they know nothing about it, I don’t like what the writers are doing with Cordelia. I hope she comes out of it, but so far Whedon’s characters (nearly) always did.

Synopsis: Although the demon killed hundreds of people he seems more focussed on a certain group. Gwen – the electrically charged thief – watches when he kills a guy and pulls somtehing out of him. As it turns out he – the dead – was one of the five “Ta-Ret” and if he gets something from all of them he can shut down the sun, not metaphorically but literally.

My Opinion: Even if Angel has the answer I don’t think he is the traitor of the group. I have the suspicion that it is Cordy who is somehow involved. Since her return she seems to be changed and I won’t believe that she slept with Connor in a “End of the World” mood.

Synopsis: Wesley brings someone that can remove Angel’s soul. Angelus would re-emerge and they hope he can tell them how to defeat the demon. Unfortunately the demon has anticipated this move and tries to kill Angel(us).

My Opinion: I am so grateful for the end of the episode. If he would have lost his soul because he slept with Cordelia, I would have been frustrated. Angel can’t be that stupid to make the same mistake twice. The quest for the sword did indeed remind me of Indiana Jones, a fact that is also mentioned by Angelus in the next episode. 😉

Synopsis: Angel’s soul is put into a glas jar and Angelus is back. To get information Angelus is kept in a cell in the basement until he tells them what he knows about this demon. In the meantime he plays with the feelings of his “guards”.

My Opinion: Angelus ist still good at this. What muds the water for me is the fact that his crossing with the demon was rather unimportant to him and very short. Which reason would Angel have to surpress that memory? If they (the writers) needed a reason to let Angelus return they should have come up with something better – if Angelus didn’t lie or left something important out. And the stolen soul hardens my suspicions about Cordelia.

Synopsis: The gang is wondering who could have stolen the soul and if they have a traitor in their midst. Angelus is still a prisoner but he perfectly plays the mind games. Then Lilah arrives in the basement and she offers a deal to Angelus.

My Opinion: I knew it! But why had I to be right this time? I also knew somehow that Angelus wouldn’t be really Angel after the spell. Nonetheless a good episode.

Synopsis: Lilah is dead and Angelus is presumed the murderer. The last duty for Wesley left to do is to make sure that she won’t rise as a vampire. But he also has another job, to get reinforcements: he brings the Vampire Slayer.

My Opinion: The son of two vampires is getting a child with who-knows-what-demon. Now it becomes really un-relaxing. But it is a bit suprising that they built up the big enemy over the entire season. If they follow the tradition of Angel, Cordelia won’t last until the season finale, but let’s see.

Synopsis: Faith is badly hurt after the fight with the demon, both physically as well as mentally. After Angelus has visted the hotel again both Cordelia and the gang try to find him and get him under control.

My Opinion: “Hearing voices no one else can hear isn’t a good sign, even in the wizarding world.” (Ron Weasley, Harry Potter and the Chamber of Secrets) Nice fight Wesley and Faith put up against Angelus but one has seen that she didn’t fight wholeheartedly. Otherwise she would have swept the floor with him. Very thrilling. And Wesley can fill out an application for the CTU, they are also in L.A..

Synopsis: Angelus bit Faith but her blood was spiked with a drug. Now both lay in a coma and try to break out of a nightmare. Additionally, Willow has come from Sunnydale to re-implant Angel’s soul.

My Opinion: Another exciting episode. A love this arc. The only drawback was that I already knew that Faith wouldn’t die because she makes an appearance in the final episodes of Buffy which run parallel to this season of Angel.

Synopsis: Gwen comes to the hotel to ask for Gunn’s help. They try to rescue a little girl who is held captive by a japanese business man. But then everything is different.

My Opinion: Good out-of-the-arc episode, but I thought that Gunn and Fred had made up again. But finally Cordelia’s cover has blown.

Synopsis: Cordelia has unwillingly unmasked herself but Conner didn’t see it, thus rescueing and hiding her. The gang tries to find out if that is really Cordelia and what happened to her. And Angel has to prevent that the “child” is being born.

My Opinion: Tell me what you want, but I don’t believe that they’ve planned this for several seasons. I think they made that up in the course of the fourth season and simply redefined former events for their purposes. Since Angelus has killed the demon we obviously have a new one now.

Synopsis: The born “child” is a beautifil woman and everyone wants to praise her and honour her. Only a confused man in a street café thinks otherwise. The hotel soon becomes a temple for the worshippers.

My Opinion: What was that? The story drops from one episode to another from “very interesting” to “boring”. I like Gina Torres, but I nearly dozed off.

Synopsis: Fred has seen through the mask and she saw the true face of Jasmine. But she is hunted by Gunn and Wesley. Yet she has found a way to break though the mask to show people her true face.

My Opinion: It doesn’t get better. OK, the majority of the gang is in the clear now, but kumbaya-Jasmine is simply boring. At least there are only 3 episodes left until the season ends.

Synopsis: The gang has to flee from Jasmine and Connor and hides in the sewers of the city. There they meet a group of people that has been there since the days the sun went dark. But there is another and older creature down there, too.

My Opinion: Jasmine is Rumpelstiltskin. Obviously the bad guys do not talk to each other. While Jasmine tries in L.A. to turn the world into paradise, the “First Evil” tries in Sunnydale to turn it into hell. But I liked the episode better than the last two.

Synopsis: Angel is in a dimension which Jasmine has visited before but the others are held prisoner in the very same cage Angelus was in. And today Jasmine wants to bring her message of peace to the entire world – via satellite TV.

My Opinion: That was surprisingly fast with Jasmine’s demise and one episode to early. But Angel is right, one cannot force happiness. It may not be a perfect world, but it’s our world, formed by our free will.

Synopsis: Angel is offered the L.A. departement of Wolfram & Hart because he destroyed the Ideal World of Jasmine’s. Of course he has no intentions of taking this offer.

My Opinion: If Wolfram & Hart really thinks they can control Angel, I think there’s a big surprise waiting for them in the fifth season. But the tour was interesting.

The Season – My Opinion: I am in two minds about this season. I really don’t like what the writers did to Cordelia and they didn’t even wake her up at the end of the season. On the other hand her part was the most interesting. When she fell into the coma she took something with her and jasmine couldn’t replace it. I hope Cordelia comes back as herself in the next season. They have built a foundation of why she can’t be with Angel and thus avoiding that he gets a “moment of true happiness”.