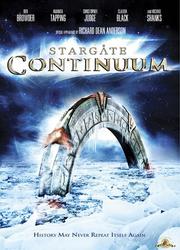 Synopsis: SG-1 takes part in the ceremony where the last Ba’al clone gets his symbiont removed. The last of the System Lords is defeated. But something is happening. First Vala disappears, then Teal’c and then more and more people. Cameron, Sam and Daniel manage to get through the Stargate home but when they arrive on Earth everything has changed. The gate is somewhere in the arctic and Earth’s history of the last 60 years seems to have changed. Another Ba’al clone has changed the past to win in the future.

My Opinion: The elements of this story aren’t new, not even to Stargate SG-1. A time travel after which the Stargate program doesn’t exist also happened in Moebius. And the way the “ripple effect” changed the future didn’t make much sense either. But I still liked this movie, it was nice to see them all again (Don S. Davis in his last appearance) and I liked how Daniel tried to speak to Daniel and how they once again joined forces with the First Prime Teal’c. Also this movie didn’t have any lengths, it felt like a slightly longer regular episode even though it was twice as long.