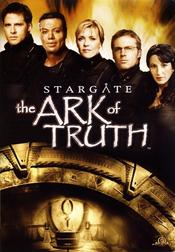 Synopsis: The Ori themselves are most likely dead. But their followers continue to fight. Daniel is now “sure” that they will find the “Ark of Truth” in the Ori galaxy. The Ark was build by the Ancients and is capable to show the truth about the Ori to every human being. Thus the Odyssey under the command of Mitchell is going to the Ori galaxy.

My Opinion: On the one hand this movie was very exciting on the other hand several things annoyed me. In my opinion to the tenth season I said that they’ve re-used old ideas. Now they’ve done it again and they’ve even included a huge plot hole. It is most likely that the self-destruction code only works in combination with the Asgard computer core since the program was written in there. If the Odyssey would have been destroyed there would be nothing that could stop the Replicators. And the Replicator zombie was absurd.
And Teal’c has been shot for the uncountableth time since the loss of his symbiote. An extra would lay motionless in the grass yet he travels over the mountains with an energy staff wound directly on the spine.
And the Ori ships in Earth’s solar system are graciously waiting with the attack until Daniel can convince them.