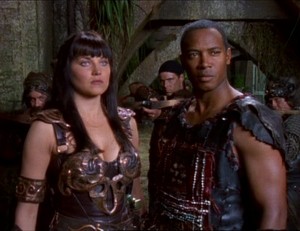 Synopsis: Xena intervenes in an old feud between two kingdoms that is fuelled by the weapons dealer profiting from it. He kidnapped the princess and blamed it on the other kingdom. Within his ranks Xena finds Marcus, an old friend of hers who still travels the road she’s left.

My Opinion: It was an OK episode, but Marcus’s sacrifice at the end was a bit unconvincing. Granted they prepared for it in that conversation between him and Xena, but he was just fighting her because he did not want to change his way of living. 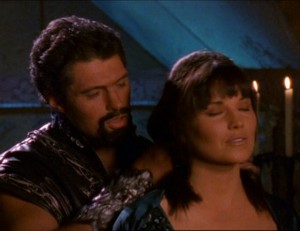 Synopsis: Ares, God of War, slaughters some innocent villagers and blames it on Xena. The surviving villagers want to bring her to trial and then execute her. Ares could help her – if she comes back to him. Gabrielle tries to defend her and prove her innocence but is being sabotaged in her efforts.

My Opinion: Even though the episode introduced the cool Kevin Smith (they are both cool, but this is not the fat one! 😉 ) as Ares, the episode didn’t work for me. Even though she was innocent she surrendered to this trial just because she has a dark past. And it looked like as if she might have let them kill her. That’s BS in my eyes. 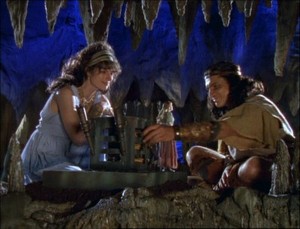 Synopsis: Gabrielle inadvertently releases three of the Titans when she recites and old chant in a huge cave hall. Amongst them is Hyperion, the Sun Titan, who is not very fond of Humans. At first they follow Gabrielle’s command since they believe that only a powerful god could have released them. But Hyperion is impatient…

My Opinion: This episode I liked. It was cool to see Crius (one of the Titans) to follow Gabrielle’s every wish and constantly calling her “the virgin goddess” and her getting annoyed by it (especially the “virgin” part 😉 ). I also thought they did the handling of the height difference pretty decently. The special effects in the show aren’t the best but here they managed it to look pretty convincingly. 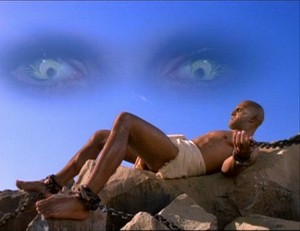 Synopsis: Hera, wife of Zeus and mother of the gods, has put Prometheus in chains. This means that mankind will slowly lose all gifts Prometheus has given them. Starting with the ability to heal and the ability to utilize fire. Both Xena & Gabrielle and Hercules & Iolaus try to free him again.

My Opinion: This was a cool episode, seeing the four of them together (I think it’s the only time it ever happens). And while it was unlikely (due to the time frame) that Hercules told Xena about Prometheus and his chains I didn’t care. I liked how they found “a solution” to free him without the need to sacrifice one of them and I liked how Iolaus and Gabrielle came closer.