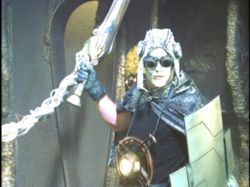 Synopsis: D’Argo has brought an alien onboard who claimed that he could cloak the electromagnetic field of Moya’s. They would become invisible to sensors which has become necessary since Scorpius deployed wanted beacons all over the place. Thy make a test run on Farscape-1 and it actually works and then they agree to follow T’raltixx to his home planet, but they have to pass a cluster of five pulsar stars and their light has side-effects on less-developed life-forms. Soon the crew starts to get aggressive and suspicious towards one another but it doesn’t stop even after they passed the pulsars. Something else is going on.

My Opinion: The funny thing is that John didn’t wear the “armour” shown in the picture above when he was nuts, but when he started to get a clear head again. 😀 I love it when fictional characters go crazy and paranoid, it’s a lot of fun to watch them: “Why don’t you want to show me the record, what are you hiding? … So now you suddenly want to show it to me? Why? What’s on it?” and so on. And why was John the hero of the day? Because Humans have less precise senses and aren’t affected as much by the light. Inferiority can help survive. 😉
Spoiler (mark to read):
And I am not sure whether or not we’ve seen the introduction of Harvey. When John sees the transmission by Scorpius during his aggressive phase, Scorpius seems to become real and gives him advise. And Harvey is the mental image of Scorpius which lives in an implanted chip in John’s head. He will be introduced later in this season.

The Way We Weren’t 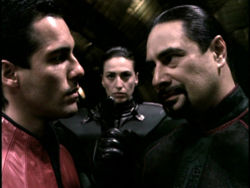 Synopsis: Chiana finds a Peacekeeper recording device which documents that Aeryn has been on Moya before and that her squadron has killed the former pilot. Aeryn didn’t know that it was Moya because she had been on many Leviathans. Slowly she begins to remember what happened back then and how Pilot became Moya’s pilot. But she’s not the only one remembering, Pilot does it as well and he’s not amused.

My Opinion: Everyone has a past and naturally Aeryn’s isn’t one painted in pink. I really liked the flashbacks because it gave both Aeryn and Pilot more background and once again it wasn’t all black/white. OK, Aeryn’s past was black, but Pilot’s past wasn’t exactly white. And again there are some parallels to Stargate SG-1: Both Teal’c and Aeryn had to leave everything behind even though Teal’c’s leaving was more a choice than Aeryn’s. Both were necessary to get the show moving but both seemed sudden. And both series showed in later episodes such as this one that it wasn’t such a sudden move after all. It just seemed that way because we the viewers didn’t know their past.

Picture if You Will 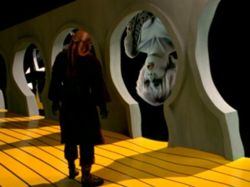 Synopsis: Rygel and Chiana trade for some items and Chiana discovers a picture that seems to depict her. But the picture is changing, it seems to predict the future: First her legs get broken and then she dies in a fire. The crew is still shocked about this when the picture suddenly shows D’Argo and his death. Every attempt at destroying the picture fails and they fear to get picked one-by-one. Back at the trading ship they find out that the picture is a creation by Maldis – the sorcerer who captured John and was defeated by Zhaan.

My Opinion: I’d would have liked to see Maldis longer, he’s such a good diabolic character. But to introduce him earlier would have meant to reveal the answer to soon. This way the episode turned from “weird in the beginning” to “really weird in the end”. I love it. The special effects may not be so special but you have to have the idea and the ultimately go through with it and tell the story.

Home on the Remains 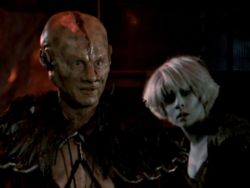 Synopsis: The crew is seriously starving and Zhaan begins to blossom (literally). She needs meat or she will die. So Moya lands in the corpse of a Budong*, the greatest space-living creature known. There is a mine and a colony in which Chiana and her brother have lived a while ago. The minerals in the Budong’s bones are valuable, but it’s dangerous because there live other creatures, too, who feed from the rotting corpse or a miner.

My Opinion: I loved the way John killed the Keedva. It simply had to be a homage to Luke’s killing of the Rancor in Return of the Jedi. But I also liked how Chiana was willing to do anything to get meat for Zhaan and how D’Argo couldn’t bear it because he cares for Chiana. We’ve seen traces of this development in previous episodes but after the kiss in the end it’s very obvious. 😉