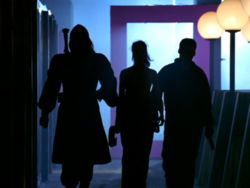 Synopsis: Zhaan has still nightmares from the time when John and D’Argo destroyed the Gammak base and Moya couldn’t find them or Aeryn. When she’s alone with John in a pod she tells him what happened during their search. On the very last planet they had any chance to find them Zhaan was arrested for a murder she didn’t commit. On that planet 90% of the population are lawyers and the planet is ruled by the leading law firm. When no one is willing to defend Zhaan because she won’t plead guilty, Chiana and Rygel step up. The problem is: Under no circumstances are they allowed to deceive or lie to the court without facing the most severe punishment.

My Opinion: A planet full of lawyers and Rygel and Chiana mustn’t lie. 😀 Of course they couldn’t hold up and used some trickery to win the case but it was great how they did it and how they used the most ancient law against the most powerful law firm. And it was so funny to see Chiana (who’s very exuberant even under normal circumstances) under stimulants. 😉

Out of Their Minds 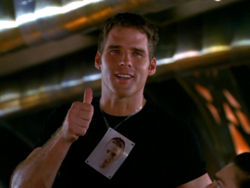 Synopsis: Moya is under attack and the shields are only at 62% capacity. When the energy weapon hits the shield a chain reaction somehow causes everybody to jump into another body. And that’s not even their biggest problem. The enemy is recharging its weapon and will ultimately destroy Moya if they don’t find a way to show that they are no threat to them.

My Opinion: The body-switch episode. A standard plot in a sci-fi or fantasy show. But here they are more honest about the consequences than most (all?) other shows. Here they show what a man in a woman’s body would actually do. 😀 But I also thought they played each other’s character very well. 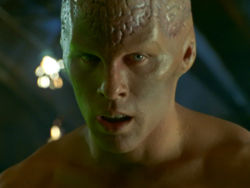 Synopsis: An energy ball penetrates the hull of Moya and floats through the ship. When Aeryn shoots at it it expands and encapsulates Crichton. Shortly after Crichton and some animal is spat out of the ball. As it turns out the animal is some pre-historic version of Crichton’s. And then the ball spills out another Crichton, this time a more advanced version than the regular one. When they finally understand what the ball is, they are forced to return one of the three “genetic samples” or Moya will be destroyed.

My Opinion: A typical “transporter accident” episode, this time not with a “good” and “bad” guy but with three guys that live on a scale from emotional to logical whereas the future guy could easily join the Vulcans. It was OK, but nothing special.

Look at the Princess – Part I: A Kiss is But a Kiss 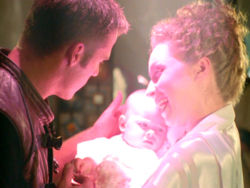 Synopsis: Most of the crew – except for Zhaan – goes down to a planet where a renegade Sebacean society lives. They have lived there peacefully for 1900 cycles and aren’t allied to the Peacekeepers nor to the Scarrans. And now the crown shall be passed from one generation to the next. But unless the princess finds a compatible partner, her brother will become emperor – and he is in league with the Scarrans.

My Opinion: Chiana and D’Argo are finally a couple and John and Aeryn start to become one – but as usual they have a long and bumpy road ahead of them and this three-parter won’t really help in bringing their relationship forward. But I really liked these three episodes, it had a number of good elements in it. It gave Scorpius and John the chance to meet on neutral grounds, it introduced the Scarrans, it revealed Scorpius nature and why he has the cooling device in his head. And it introduced the fact that Humans and Sebaceans can be genetically compatible.

Look at the Princess – Part II: I Do, I Think 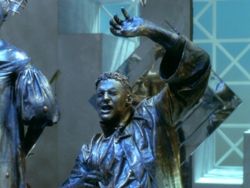 Synopsis: Moya had to starburst away because Scorpius’s Command Carrier has found them. But now she’s following a call into a nebula – to her gods. The Builders who gave the Leviathans intelligence and a soul have decided that Moya’s journey is over because she gave birth to a gunship.
Meanwhile Crichton has agreed to marry Princess Katralla, because otherwise he would be handed over to Scorpius and the planet’s neutrality would end with Prince Clavor’s inauguration. What he didn’t know: He and his wife will be made into statues for 80 cycles to observe and learn how to rule.

My Opinion: The middle part was OK, but I found it a bit ridiculous that Crichton would survive a drift from one spaceship to another without the protection of a spacesuit. It might sound a bit pedantic because D’Argo has done it before, but he’s an alien, he gets a bigger concession on such things. I still found it fascinating how many (rivalling) parties with their different agendas were involved in this entire affair and how they blocked and (involuntarily) helped one another.

Look at the Princess – Part III: The Maltese Crichton 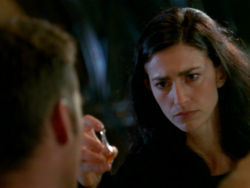 Synopsis: After his plan has failed, the Scarran decapitates John and throws his bronze head into an acid bath. This way the prince could still become emperor. But apart from the gang there’s someone else who can’t let that happen: Scorpius, the Sebacean/Scarran half-breed who still wants the wormhole knowledge.
Meanwhile Zhaan is still trying to convince the Builders that they should let Moya (and subsequently Pilot) live and not condemn her for things that were out of her control.

My Opinion: It was a really nice twist that the Builder’s decision to kill Moya wasn’t about Moya at all but to test Zhaan and her intentions. After all, she could breed a fleet of gunships if she wanted to. That the three of them would leave the nebula was a given and that’s why I liked that they didn’t choose the most obvious solution to that plotline. I also liked the solution to the main story, especially since John was willing to fulfil his responsibilities even if everyone he knows would be dead in 80 cycles. 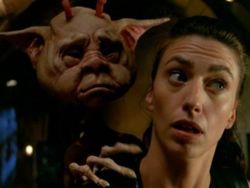 Synopsis: The crew has bought some new food supplies but it might be infested by a parasite. Thus Dargo and Chiana have bought a Vorc that is supposed to kill that parasite. Soon the question arises whether the Vorc is some kind of hoax sold to strangers. But there is actually some larger creature on the ship and it is attacking the crew. Or is the Vorc itself the parasite?

My Opinion: Evertime I watch this episode I had forgotten how the parasite story turns out, the only thing I remember is that the little critter is innocent and dies in the course of his duty. It’s a very sad moment when he dies in Aeryn’s arms who holds him like a baby. As I said before, it’s amazing how real all these puppets on the show feel. Reminds me of “There is … another … Sky … walker”.