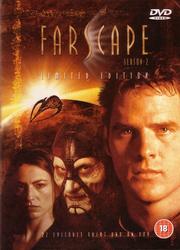 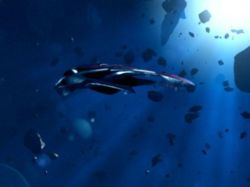 Synopsis: Moya and what remains of her crew can’t return to the asteroid field as long as the Command Carrier is there. But she wants to go back to her son who is still hiding there and is now under the command of Crais. Fortunately Aeryn has found D’Argo and John floating in space and has brought them to an asteroid that has an atmosphere. There they’re biding their time in the hope that they will somehow get out of there.

My Opinion: Until short before the end of the episode it remained unclear where Crais’s loyalties really lie and whether Aeryn’s loyalties may have shifted (it’s a new season after all). I also liked how John taught D’Argo rock-paper-scissors and how the latter insisted that rock should defeat paper. 😉 But at the end if the episode everything returned to the way it was before the Gammak story. Ok, not everything, Crais and Talyn will go their own way but they will cross paths with Moya and their crew again, but not for a while. 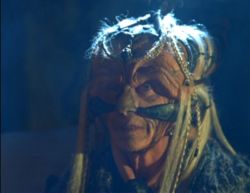 Synopsis: D’Argo has the great honour to meet an Orican – a holy woman of the Luxans. She’s the only one of their race there and she will die soon. After Ka D’Argo has proven his strength he’s allowed to participate in the Ritual of Passing. But when she senses how powerful he is she changes it to the Ritual of Renewal and is suddenly young and strong again. But something must have gone wrong because Moya’s systems begin to break down and Pilot is dying.

My Opinion: A rather uninteresting story. And it didn’t happen much either. 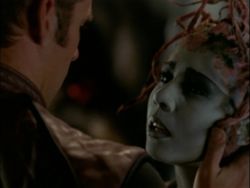 Synopsis: Chiana was just informed that her brother has died but no one takes the time to comfort her. In her grief she leaves the ship and flies to a planet. John and Aeryn follow her but when they find her she seems to be a different person. And there seem to be no elders there, nobody older that 22. As it turns out everyone participates in a ritual of “taking the stone” where one jumps down an abyss and is caught by a sonic net enabled by one’s own voice. But that’s a trickery business and if one fails, one is dead. And Chiana is planning to make that jump herself.

My Opinion: I really like it how John tries to keep the crew together and how he tries to care for each and every one of them – this time for “Pip”. That’s of course because he’s the main character, but I still really like it. Everyone contributes their strength and his strength is to keep them together even if that means that he has to eat weird drug mushrooms. 😉
But sometimes I wonder where the Australians find so many strange people to let them be seen on Mad Max or Farscape. 😀