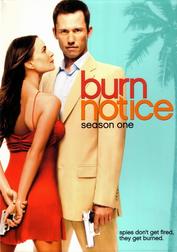 What’s the show about?
Michael Westen used to be a spy. But one day he got “burned” and was dumped in Miami. Ever since he tries to find out why he was burned and by whom. In the meantime he helps people the normal police can’t or won’t help. He has help, though: A trigger-happy ex-girlfriend, who used to rob banks for the IRA; another retired spy who has settled down in Miami and makes his “special lady friends” happy; and his mother!

“Pilot”
Michael Westen was about to finalize a deal with a local crime lord to protect a certain piece of land in Africa, but when he tries to get the money wired he’s informed that the deal is off because he got burned. Although they beat the crap out of him he manages to escape. The next time he regains full consciousness, he’s in Miami and his “emergency contact” (his ex-girlfriend) Fiona is sitting by his bed. He tries to find out why he got burned and how his mother had fount out that he was in town. Since his credit cards won’t work anymore he takes a small job to find out who stole a number of paintings from a rich man’s house.

My Opinion
In the beginning it was just OK, but it got better with every episode, especially when the “burn notice” arc fully kicked in. The characters are all great, especially when Michael’s mother Madeline becomes more and more involved in Michael’s cases and he has to deal with her and Fi at the same time. 😀 The show is very humorous but it’s still an action show and people get killed all the time – but usually not by any of the good guys: Michael is a master “chess player”, he usually manages to make the bad boys kill each other, thus solving the problem.

So, that’s all folks, no more pilots in the pipeline…