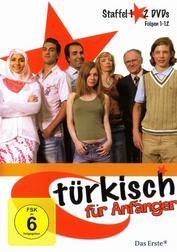 What’s the show about?
The show revolves around a German melting pot family, consisting of Metin Öztürk, a German police detective of Turkish origins and his son Cem, a wannabe gangsta and his daughter Yağmur, who’s living by strict Islamic rules.
On the other side you have Doris Schneider, a libertine psychoanalyst and her daughter Lena, whose BFF just left for America in a student exchange program and Nils, the baby in the family.
Now they try to build one family – but in actuality a war has just begun. 😉

“Die, in der ich meine Freiheit verliere”
(lit. “The One Where I Lose My Freedom”)
Lena is happy to learn that her mother has stopped dating that “Albanian terrorist” when they announce that they are moving in together in a new home. Aside from the happy couple only Nils can see anything good in this and Lena and Cem almost instantly declare war on each other after Cem tried to bully Lena into wearing less “slutty” and more traditional clothes. For this he hires is “gangsta buddy” Costa which in itself is an odd combination since Costa is of Greek origin.

My Opinion
I love the show. Sometimes it gets a bit tiresome because Lena’s and Cem’s story is getting much more complicated and Lena’s sometimes too egoistic and egocentric but in the end they all grow up. 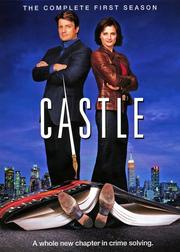 What’s the show about?
Richard Castle is a thriller author and he has a new muse now: NYPD Detective Kate Beckett who will become Nikki Heat in Heat Wave and Naked Heat.
Thanks to his friendship with the mayor Castle is partnered up with Beckett and together they solve real-life murders.

“Flowers for Your Grave”
Richard Castle is a successful thriller author who’s killed his last protagonist Derek Storm by putting a bullet through his head. There’s no Reichenbach Fall in Storm Fall. His blood-sucking publisher and also blood-sucking ex-wife is waiting for the next manuscript but Castle has writer’s block. That is until Detective Beckett approaches him because there’s a serial killer out there who’s mimicking the murders in Castle’s books.

My Opinion
I love the show. The dynamics between “Caskett” work very well and the cases are interesting. There are underlying season arcs but most of the time it’s a case-of-the-week show and that’s just fine with me.
Although the most mysterious question on the show is how his daughter became so well-behaved with a father like that. 😉 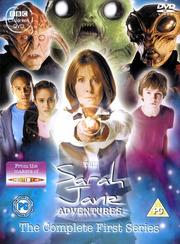 What’s the show about?
It’s the third show in the Whoniverse (after Doctor Who and Torchwood). In the UK Doctor Who itself is aimed at (older) children (“The story and the monsters for the kids, the Doctor for the mums and the companion for the dads” as the saying goes) but The Sarah Jane Adventures is aimed at young children (and those who stayed young ;)). Sarah Jane used to be a companion to the Third and Fourth Doctor in the 70s and she had a few adventures with the Tenth Doctor. Now she has adventures of her own with her adopted son and his friends and the Tenth and Eleventh Doctor visited her on her own show.

“Invasion of the Bane”
The kids of the neighbourhood start to notice that something weird is going on in Miss Smith’s backyard because she’s visited by what looks like fairies. Sarah Jane – she is a newspaper reporter by day – on the other hand investigates a factory that gives away free soft drinks to all the children that visit the factory. When she discovers that there’s a young boy who appears to have been created in that factory, she knows that something otherworldly is going on.

My Opinion
I enjoyed the show. It took existing aliens from the Whoniverse and adapted them for the show (e.g. where the Doctor has to deal with adult Slitheen, Sarah Jane gets to deal with their offspring). But it also invented their own races and told stories about them.

Sadly the show came to an end when Elisabeth Sladen died from cancer a few years ago.


(lit. “Spook under the Ferris Wheel”) 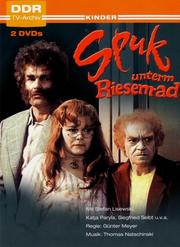 What’s the show about?
This is a children’s show from East Germany. It was the first in the “Spuk” series. During the summer three kids spent their days on the fair grounds and mostly in the haunted house their grandparents run. Three of the life-size puppets come to life and cause havoc in East Berlin and later the Harz mountains.

“Die Ausreißer”
(lit. “The Fugitives”)
One day a group of kids accidentally get three life-size puppets dirty: the witch, the giant and Rumpelstiltskin. When they secretly try to clean them in the river Spree the puppets come to life and escape. Their first mission is to get a broom so that they can fly away from this strange town they’ve woken up in, so they visit the next shopping mall and steal the next best thing to a broom: a vacuum cleaner.

My Opinion
When I was a kid I enjoyed this seven-part show. So when it became available on DVD I bought it purely for sentimental reasons. But if you’re having small children, it’s still a great story. 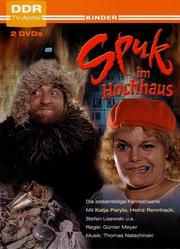 What’s the show about?
This is a children’s show from East Germany. It was the second in the “Spuk” series. 200 years ago an inkeeper and his wife used to rob rich travelers until a police officer stops them. He curses them to do seven good deeds or else they won’t rest in piece.

“Feuer und Wasser”
(lit. “Fire and Water”)
After they’ve accidentally killed a police officer who tried to stop them robbing their customers both the innkeeper and his wife die when the inn burns to the ground. But since they had been cursed they don’t stay dead. Now – 200 years later – they awake again and can only find piece when they do seven good deeds. But where their tavern used to be is now an apartment complex (in East Berlin) and a strange new world.

My Opinion
I can only repeat what I’ve said before: When I was a kid I enjoyed this seven-part show. So when it became available on DVD I bought it purely for sentimental reasons. But if you’re having small children, it’s still a great story.