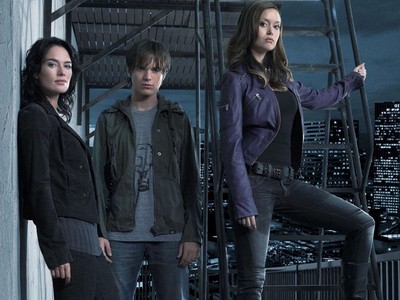 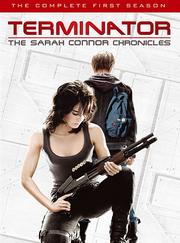 Synopsis: It’s the year 1999 and Judgement Day hasn’t happened – yet. Sarah and John are constantly switching aliases and living placaes. But one day two cyborgs have still found them: One comes in the form of a young girl called Cameron and she was sent to protect John. And the other is a classical terminator. They try to escape him but in the end there’s no place they can hide, just another time.

My Opinion: To fully enjoy the show one has to put it in a parallel universe to the movies. It’s similar to the Highlander movie (There can be only one!) and the series. While I liked the general general idea of the show I had a problem with some story elements. For example: Cameron took the other cyborg out with a power surge. In my unprofessional opinion two minutes should have been enough to somehow destroy him or at least to damage him severely – he can’t resist after all. And some of the stuff in the vault seemed unlikely, too. Even if I knew how to build a microchip in 1965 there wouldn’t be the the technology (wafers etc.) to actually do it. But they had to find a way to push the series forward to today and it was fairly ok.
So I like the story but one mustn’t think to much about the logic.

Synopsis: They jumped eight years into the future, into 2007. And now all three of them need new identities to blend in. Cameron leads Sarah to a group of resistance fighters who were send back by John to destroy Skynet before it goes operational. But when that fails they have to visit an old friend. Meanwhile John explores the technological differences between 1999 and 2007.

My Opinion: The writers are obviously not very burdened with the complex issues that go with time-travel. It seems that whenever they need it they will send people back and forth through time as if nothing could disrupt the timeline. But if that were so then we would be back on the concept of a time-loop as the movie Terminator had present it (It has always happened that way and always will be, there’s nothing we can do about it). But Terminator 2 had thrown that overboard and declared that the timeline can be changed and (as Doc Brown explained it in Back to the Future 2) that will result in another timeline. I also had a problem with that “Zombie Terminator” who can obviously walk without its head attached – I thought the “eyes” were its optical sensors?
Another thing I noticed: I don’t know how far ahead the pilot was shot and what they thought would happen after it, but I didn’t have the feeling to see a Mrs. Dyson or a detective who was eight years older than in the pilot. They should have used a better mask to make them look younger in the pilot (Look at Bruce Boxleitner in Babylon 5: In the Beginning!)
Too bad Enrique had to die, I would have liked it to see Tony Amendola (Master Bra’tac in Stargate SG-1) more often.

Synopsis: Sarah is looking for former employees of Cyberdyne Systems to check whether they are continuing the Skynet project or doing something else dangerous. Connor and Cameron pose as siblings in their new school and try to blend in.

My Opinion: Is it my imagination or did the metall skeleton of that terminator look a bit too shiny? He had been blasted to peaces and has lain in the garbage. Which brings up another question: How did he get there in the first place? He wasn’t within the time bubble and thus hasn’t travelled with the others. What happend to that bank building in the last eight years and why has no one ever found the skeleton or the head – which lay quite open on the side of the street?
And when Sarah burned down Andy’s house the fires looked digital – and fake. Don’t they have the money anymore to burn down a real, wooden facade?

Disc 1 – My Opinion: The show is enjoyable, the characters are fine. But as you can see the show opens a can of questions for me and they bother me because that makes me thinking that either the writers didn’t see this problems or they thought the viewers wouldn’t notice or that the viewers wouldn’t care. None of which is really an acceptable answer in my opinion. But I will continue to watch and see how it unfolds.

Synopsis: While the others are asleep Cameron checks for possible threats and she finds a huge shipment of the alloy the Terminators are made of. It’s protected by another Terminator but John wants to steal the alloy and destroy it.

My Opinion: I liked it that John took charge even if it was dangerous. But apart from that not much has actually happened.

Synopsis: Andy – the man who had built the Turk – build yet another machine. It’s a chess machine and he’s competing in an computer chess tournament to win a government contract with the military. But someone kills Andy – it’s the missing resistance fighter.

My Opinion: For some reason I expected the whole time that Cameron would challenge one of the chess computers. I know that they have to stay undercover and she’s a machine and has no emotions, but still, something in her eyes made me expecting it. I still don’t know what to think about the “FBI Terminator” / “Cromartie” yet because I have no idea what kind of plot they have for him in future episodes.

Synopsis: Derek Reese, the resitsance fighter and brother of Kyle Reese, will die if his wounds aren’t treated. John contacts Sarah’s former fiancé from eight years ago because he is a paramedic. And while he tries to save Derek and learns the truth, Derek has dreams about his past (or future, depending on the point of view).

My Opinion: This was basically the introduction episode for Derek and since they’ve put that much effort in explaining his background I believe he’ll stay for a while. I like him, he seems like the right type to be a resistance fighter. And with every episode I like Cameron more.

Disc 2 – My Opinion: Either I have become more lenient or they didn’t make as many mistakes as in the previous episodes. I also think the addition of Derek and Charley could be interesting. But that depends on how long they will stay.

Synopsis: After he found the hand of the Terminator Special Agent Ellison begins to dig real deep into Sarah Connor’s file. He watches her video tapes from the mental institution and he tries to get in contact with Dr. Silberman, her psychiatrist during her stay there. Meanwhile Cameron tries to retrieve the Turk.

My Opinion: I liked this episode for two reasons. The first one is the nice wrap-up of the second movie. And even though it’s on “another timeline” I thought that this Dr. Silberman was very close to the one we saw in Terminator 3 shortly before he encountered the Arnie-Terminator for the third time.
But my favourite scene of this episode was when Cameron left the apartment after she got the information. This scene screamed at me “Never forget that she’s a machine, not a feeling, living being, no matter how she looks like.”. She protected them as long as she needed them and then they were of no more concern to her. To save them would have been an act of humanity and that’s not on her program.

Synopsis: Derek finds the CPU of the previously destroyed Terminator and accuses Cameron of lying and she admits to it. After the argument is over, John tries to load the data from the memory chips to see what the Terminator was doing before he was destroyed. And there they find a connection to a project which can control the entire traffic infrastructure of Los Angeles.

My Opinion: This is one thing that has always bugged me on Science-Fiction series: That somehow all computer hardware and software is compatible and that they can communicate with one another. OK, Skynet and the Terminators are an invention of the human race but where did John even get a compatible interface port to plug the CPU in?
But that aside I liked the fact that both Cameron and Derek became a bit more grey (ok, we already knew he killed that Turk guy, but still).

Synopsis: Sarah tries to purchase the Turk but the seller tries to blackmail her with her past and he’s watching John to make sure Sarah pays. But his plan doesn’t turn out as expected. Meanwhile Ellison discovers that Kester is a fake FBI agent and he tries to take him down.

My Opinion: Taking into account that it wasn’t planned as cliffhanger it was a decent one. It leaves quite a number of questions open that demand an answer and thus the viewer will most likely tune in “next year”. I especially wonder why Ellison is still alive. Is he important to Skynet or is it just because he was unarmed and no threat to Cromartie? But then again Terminators are not the Borg, why should he let someone live who can identify him? As I said, enough reason to continue watching.

Disc 3 – My Opinion: I like the show better with every episode I’m watching and the less time travel is involved the less mistakes with the timeline happen.

The Season – My Opinion: It’s not the best show in the world, but very enjoyable, especially due to the two female leads. I’ll continue watching it even though it’s likely to get cancelled after the second season.