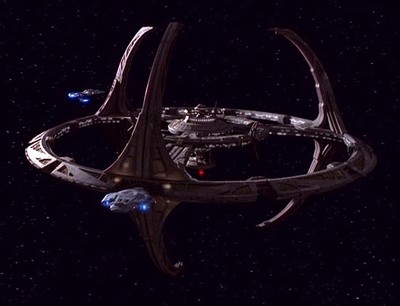 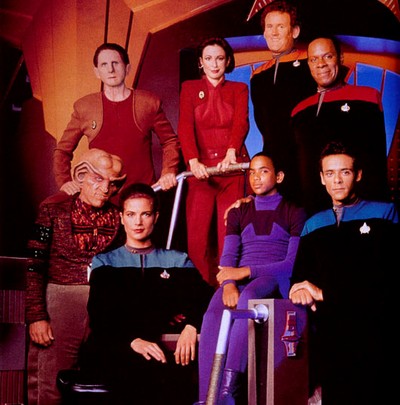 Since this is the third series within the Star Trek universe, I’d like to explain a few settings.

Geography: In Star Trek, the Milky Way is divided into for logical quadrants, Alpha to Delta. The Sol System (we) lays directly on the border of the Alpha and Beta Quadrant. The Federation consists of 150 worlds, most of them being in the Alpha Quadrant. Great parts of the Beta Quadrant belong to the Klingon and the Romulan Empire. The Klingons are our allies, while we have a fragile peace with the Romulans.
Another major power is the Cardassian Union with whom we recently (throughout the 2360s) were at war. But now we also have a fragile peace treaty with them. The Gamma and Delta Quadrant are fairly unknown to us due to the vast distances.
Which brings us to traveling. The Warp Drive allows us to travel faster than light, current Warp engines allow a constant traveling speed of Warp 8, which is approx. 1024 times the speed of light (c). The Warp scale is exponential with Warp 2 being 10 * c, Warp 9 being 1516 * c and Warp 10 an unreachable indefinite speed. With our galaxy being 100,000 light years in diameter, it’s still huge even at these traveling speeds.

Races: The Federation consists of a number of different species, among them the Humans, the Vulcans, the Betazoids (telepaths). The Klingons are a proud warrior race while the Romulans are descendants of Vulcans who left a long time ago because they didn’t agree with “the establishment”. The Cardassians are conquistadors who try to widen their own territory.
We know that the Borg live in the Delta Quadrant. They are a biomechanical race who assimilate other life forms and their technology into their collective. In 2366 one Borg cube attacked a Federation fleet of 39 ships and destroyed them all.

And now we can start…