Battlestar Galactica
by Jeffrey A. Carver

My Opinion: It’s the novelization of the mini series and it follows the script very closely, including the jumps between the several plot locations (Galactica, Caprica, Colonial One, …). I’ve read better and worse novelizations, a better one would be Babylon 5: In the Beginning and worse ones would be the original Star Wars trilogy. 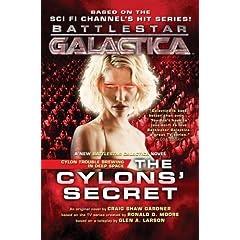 Synopsis: 20 years since the Cylons have left the colonies and 20 years until they will come back. Adama has rejoined the forces and is now Colonel and the XO of the Battlestar Galactica. He has managed to get Tigh on the ship where he serves as Viper pilot instructor.
Tom Zarek on the other hand is a member of a scavenger ship. One day they stumble across a research station on a planet far away from the colonies. There they are still conducting research on and with (original) Cylons. Neither party knows that there are beings who closely follow that research and that they have a great interest to keep that station “off the radar”.

My Opinion: Not that interesting in my opinion. The text is easy to read and the story is pretty much straight-forward. Who the mysterious beings might be isn’t much of a guesswork when you know the series and the number of different lifeforms in the BSG universe. The author didn’t contradict the canonical history to the best of my knowledge. But that also means that he didn’t tell us anything new about them – at least not very much.

Sagittarius is Bleeding
by Peter David 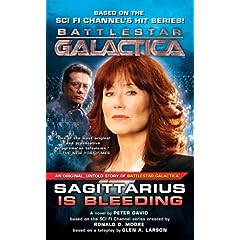 Synopsis: The story of this book is set between the second season episodes Black Market (2×14) and Scar (2×15). President Roslin has weird hallucinations. She sees Sharon Valerii everywhere. Has this something to do with the fact that she’s got the blood of Sharon’s unborn child to heal her cancer? She can’t sleep and when she does – or even when she’s awake – she gets a message: “Sagittarius is bleeding”.
One of the ships in the fleet, the Bifrost, belongs to the Midguardians, a group of heathens who does not believe in the Lords of Kobol. They ask for permission to be recognized as 13th Colony of Kobol – or as 14th, if you count Earth. And they can offer something in exhange.

My Opinion: This was an interesting read. I like books from the author – Peter David – who has also written books in the Star Trek and Babylon 5 (and other) franchises. It didn’t became clear until the end what exactly the Midguardians were planning and all the characters behaved like they would in a TV episode. OK, we’ve never heard of these Midguardians before and probably never will again but in a fleet of 50,000 indivduals who can know them all?
While I liked the book in general, I have one problem with a certain character – especially at the end of the book.
Spoiler (mark to read):
Boxey – who played a key role in this book (but wasn’t seen on the show for quite some time now) – is suspected of being a Cylon. Of course it was Baltar who has put him in the spotlight. That itself is not a problem. But the end clearly indicated that he is actually a human model and unless he doesn’t become the twelveth human model in the show this was a plot hole. The book is non-canon but I honestly don’t see the reason why Peter David did this. It wasn’t even necessary for the story. 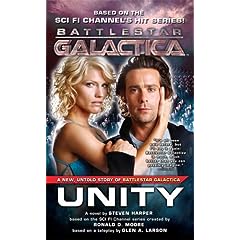 Synopsis: After having repelled another Cylon attack on the fleet, Starbuck finds a colonial escape pod in the debris of the Basestar. The famous rock star Peter Attis who was held by the Cylons is in it.
But Attis is bringing two “gifts”. For one thing he is a trojan horse of the Cylons’s. He brings a disease to the fleet and it is spreading fast. First the people start to babble nonsense and then it becomes terminal. But Attis also believes that he is the “Unifier”, a religious leader who can protect mankind from becoming extinct.

My Opinion: I’ve been sceptical fro quite some time because the author developed a story around Caprica-Sharon that wouldn’t fit into the official storyline. But he managed to create a conclusive solution so that it hasn’t any ramifications on the show. I also like the characterization of Kara and Gaius – it felt genuine, like they would behave on the show.
The religious conflicts within the fleet also seemed realistic, even though they are only a side issue on the show. That some people could start to believe that the Cylon god is the better one is a reasonable assumption considerig they barely survived an Armageddon.