In opposition to the early adopters I’ve always been more of a late adoper. Especially when it comes to trends and hypes. Every time a hype is rolling I am against it per se. And to be honest in most cases the hype doesn’t last long and it was a good thing I wasn’t being involved in that crap.

Something like that happend with Friends. It was running on TV all the time but I haver felt any connection to that flat sharing community from New York. Over the years I watched a few episodes but I had never the urge to zap in the next week. Since a few months, Friends is running again on the german TV station Kabel 1 and I watched a few episoded again.

When we talked about this show at work, a friend of mine recommended this show wholeheartedly. He watched it during its original run and additionally with the original soundtrack (usually movies and shows are dubbed in germany).

Thus I made the decision to buy this show three years after it ended. And I decided to buy the entire show at once. Unfortunately the german box is sold out and I didn’t want to have a variation of different box types. Then I found the UK box and bought it for 90£ (135€, $187). 13.50€ is a fair price for a season box around here, although a national electronic store is currently selling them for 9.90€ apiece. Well, at least I’ve got a really nice package for all ten seasons: 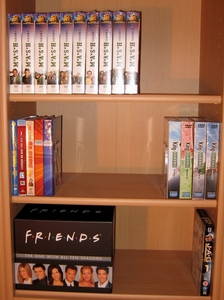 And what can I say: I was fascinated from the first episodes on. The facial expressions and the gestures of the actors and the jokes are awesome.

But the most important element of the show is a continuing story telling. As I have stated in this blog before (and also in the forums I am posting), TV shows must have a continuing storyline to be interesting. I grew up in the 80s and (being born in east germany) I watched a lot of “Westfernsehen” (TV stations from west germany). I watched everything the TV stations deemed worthy of broadcasting: Star Trek, The Fall Guy, Riptide, MacGyver and so on. But somewhere in the history of making TV shows they switched to continuing stories. Examples for this are Babylon 5 and later on also Star Trek: Deep Space Nine. Both shows, as well as Emergency Room and Friends started in the years 1993/1994. In my opinion these shows had a lasting impact on TV shows.

Some say that Friends was corny and contained many soap elements (especially the Ross/Rachel story and the season cliffhangers) but they always spiced it up with a great pinch of humour.

But let’s look on other comedy shows in comparison: Married With Children, Home Improvement and King of Queens. All sitcoms in the classical fashion with a certain set of places (first and foremost the living room) that remain constant throughout the years. The difference is that the characters only change slightly or not at all. Granted, the children get older but other than that very few things change. If you watch an episode of the first or seventh season becomes only clear through the age of the actors. That’s my personal reason why I stopped collection these shows. There is no need to watch the next episode. You’ve had a few good laughs but when the next episode begins everything has been resetted.

On Friends there is the additional element of the relations between the characters. This is through the chosen setting (6 friends). Almost all characters are “combinable”, while the classic sitcoms is based upon a family and thus the characters have defined relations among each other. Just the combinations of who is roomie with whom and situations based on that are simply not doable in other sitcoms.

The next thing is the ensemble. No one of the six is perfectly normal but that is not unusual among sitcoms (Al Bundy, Steve Urquel, Dharma Freedom Finkelstein-Montgomery) but in this show everyone is a bit of a weirdo. And they are well-balanced. Nowadays Jennifer Aniston may be the well-knownst actress but I had never the feeling one of the characters was missed out. No character outshone all others nor was anyone over-shadowed. Granted, Joey had the least character developement of all (although he made a great leap forward over the last two seasons) but that doesn’t mean the others outshone him.

So I watched The One Where It All Began for the first time on October, 18th and in the night from November 1st to 2nd The Last One. 14 days (in which I regulary went to work) for 236 episodes á 22 minutes. A great deal but absolutely worth it. One hopes, worries and suffers with the characters and that’s exactly what makes a good TV show. When you almost get the feeling the characters are real and not just on that screen. When you ask yourself after the last episode whether they will see each other on a regular basis even when they live in different places now.

I thank you Monica, Phoebe, Rachel, Chandler, Joey & Ross for a great time!