Doctor Who 5×01 The Eleventh Hour
Ironically the first thing I noticed about the new series was that the TARDIS doors opened outwards which I can’t remember the ever doing before. The plot seemed pretty straight-forward, I can’t say there were any surprises for me (e.g. that the Doctor isn’t the most punctual man has been proven time and time again [e.g. when he brought Rose home for the first time in Aliens of London; The Girl in the Fireplace]; that he challenges his enemies to look him up [e.g. Forest of the Dead]).
Even the threat that silence is descending isn’t a surprise – they need a plot for the season finale.
But I like both characters so far – i.e. I’m willing to give them a chance -, I’m just wondering if we will see any of the old characters ever again (With the exception of Professor River Song who was in the series preview).

Actually this was my first ever episode of Doctor Who that I watched “live”.

Chuck 3×13 Chuck vs. the Other Guy
While this was a very good episode it still felt a bit rushed. Shaw either knew this about his wife a while – which would explain his sometimes creepy looks throughout the season, but then it wouldn’t explain his outburst when he saw the footage; or he decided to switch sides after he saw it – which then would be very rushed.
Also some things were very sledge-hammer-y like the constant nods towards the security cam.
But everything considered I really liked how it played out and just hope that we can now return to Fun-Chuck & Ass-Kicking-Sarah for the rest of the season.

I also liked the Firefly class reunion of Badger and Jayne: 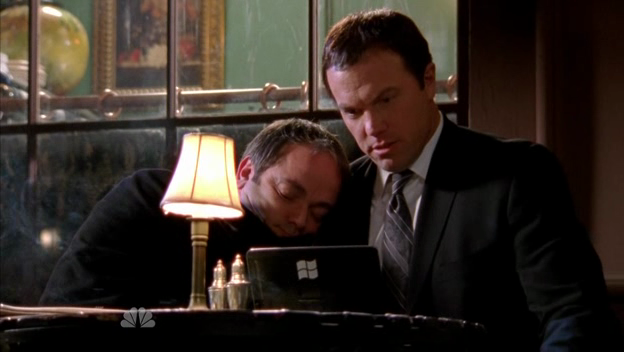 Castle 2×19 Wrapped Up in Death
I loved it how Beckett fooled Castle (it had to be her 😉 ) and how he tried to get rid of the curse of the mummy. 😀
Otherwise I thought there was a bit too much “coincidence” in this episode. The mummy of “servant girl #6” is the girl that was murdered and this is the mummy they choose to (illegally) sell into private hands? Talk about bad luck…

Bones 5×15 The Bones on a Blue Line
It actually explains a lot. I always wondered how Bones would manage to write a thrilling novel and include personality traits in her characters that are so obviously alien to her. I also loved the entire talk about “that thing he does on page 187” and also how the actual persons are not the characters in the book.
But if all the personal stuff is from Angela that would mean she invented the scene where Amanda had sex with Agent Andy. Is there something we should know about?

Bones 5×16 The Parts in the Sum of the Whole
It certainly was an interesting episode but the end was a bit disappointing. They drag out the usual will they/won’t they plot but I can totally understand Booth’s POV that he won’t wait forever. He took a leap of faith and suddenly there was just air below his feet.

Even though it had a nice touch bringing Caroline Julian and Camille into this episode, it still is a plothole. When Caroline was introduced in 1×19 The Man in the Morgue, Booth introduces her to Bones. While Caroline may have forgotten Bones (she even says so in this episode), I doubt Brennan would have forgotten.
Also when Camille and Bones meet in 2×01 The Titan on the Track both explicitly state that they have never met before.
Both from the 1×19 and 2×01 point of view the events in 5×16 took place only about two years before.

Doctor Who 5×02 The Beast Below
That was a really cool new episode and I always like it when the Doctor is pissed at the Humans because they did something terrible because that proves even though he loves them he shows no favouritsm towards them.
I also loved how Moffat caricatured the voting process of most western democracies (vote and forget for the next years…) because there was a whole lot of truth in it.

10 Things I Hate About You 1×11 / 1×12 Da Repercussions / Don’t Trust Me
With this the second half of the first season has begun and the show is as quirky as ever. And I still love it.

Cougar Town 1×19 Everything Man
It was an OK episode but it was a bit too much about Jules. I know she’s the main character but the episodes are often funnier when it’s more balanced between all these characters. I especially think all the men are funnier than the women on this show.

FlashForward 1×14 Better Angels
I’ve been rarely so bored. I seriously start to wonder if I should even bother watching this show until it’s season (series?) finale.
The only note-worthy thing about this episode was that the CIA once again managed to destroy the hope for peace on the African continent…

And while I’m writing this I’ve discovered that this was last week’s episode and there’s already another in the pipe. Oh boy.

Gossip Girl 3×16 The Empire Strikes Jack
Why does Jenny always have this undeserved luck? She’s a real Karma Houdini, that one. Why do the writers do that? Or do they intend to bring her house down in an apocalyptic fashion?

Gossip Girl 3×17 Inglourious Bassterds
What’s up with the Bass family? Must be genetics. And why do the writers destroy all the progress Chuck’s made? Just for the sake of the drama? That’s lame…
And Jenny starts her next mess. Is it possible that she is genetically not a Humphrey?
I also love the development that Vanessa is applying for the same writing program Dan is without telling him. Imagine all the drama when she gets accepted and he doesn’t (for whatever reasons)…

And now I’m off fighting my way through this week’s FlashForward.

FlashForward 1×15 Queen Sacrifice
Slightly better than the previous episode but the main problem with the show is: I don’t care why the bad guys do what they do, I don’t even try to find out what the master plan, the grand scheme of things is. I couldn’t be bothered to put that much effort into the show.
As for the mole: I’ve watched to many years of 24 to be surprised by anything anymore.