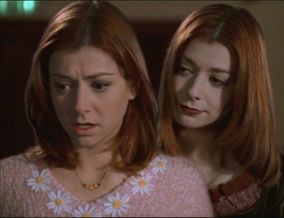 Synopsis: Anyanka/Anya wants to have her power center back that was destroyed by Giles in the alternate reality Cordelia accidentally created. She tricks Willow into doing a spell but it doesn’t work as expected. Instead they pull Vampire-Willow from there into this reality and she – after a short period of acclimatization – tries to make it as “fun” as her reality was.

My Opinion: “And I think I’m kinda gay.” Nice foreshadowing. 😉 I really like this episode, it’s fun to watch and Alyson is great in all four roles ( Willow, Vampire-Willow, Pretend-Vampire-Willow, Pretend-Willow). I also liked Anya in all her scenes, especially when this 1120 year-old ex-demon tried to get a beer in the Bronze.
Too bad Vampire-Willow died in her reality, it would have been cool to have her back at a later time. 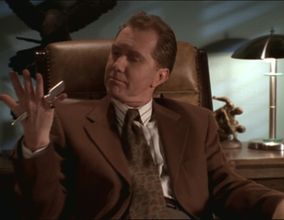 Synopsis: A demon tries to sell the “Books of Ascension” to the Slayers. While the gang is discussing how they get their hands onto these books before the mayor does, Faith reports back to him and gets the books for him. They also try to turn Angel into Angelus again. First by seduction then by magic. But not everybody in the Scooby gang is fooled by Faith.

My Opinion: It was a bit too convenient that Giles knew the demon who was supposed to turn Angel but otherwise it was an interesting watch, especially since even the viewer didn’t know of Giles’s/Buffy’s/Angel’s plan to con Faith. And Pretend-Angelus was awesome once more, he has such a great malignity. 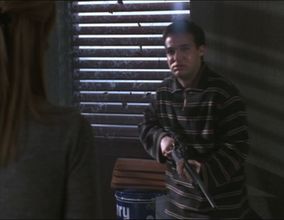 Synopsis: When Buffy fights against two demons and kills one of them, some of his(?) blood splatters over her hand. At first it just itches but then she begins to hear voices. But she doesn’t hallucinate; she can hear the actual thoughts of the people around her. At first this is fun and could be a great advantage in combat but soon she can’t shut anything out anymore and on top of that she hears the voice of an unknown person who wants to kill all the students.

My Opinion: One of my favourite episodes, I love these kind of truth-telling episodes because at first it’s great fun but it’ll ultimately turn for the worse. I especially liked it how they characterized the thoughts of the characters (Cordelia: think = say; Xander: sex; Oz: deep thoughts yet silent) which matched them perfectly. I also really liked Buffy’s speech in the tower.
I believe this is the first time Jonathan was featured as a bit more than a “runs through picture” character. I really like that kind of continuity because it makes the show feel more wholesome in contrast to shows where the episode cast is exactly that.

Synopsis: Their time in High School is coming to an end and after that their ways will most likely part. Buffy has been accepted to Northwestern, Willow to every university with a stamp and Xander is going to backpack over the country. But first they have to literally survive graduation day and Mayor Wilkins’s ascension. They have to steal the “Box of Gavrok”. They don’t know what it contains but it seems to be important to him.

My Opinion: Mayor Wilkins is not among the best of the Big Bads but in episodes like this I really appreciate him. His talent to bluntly tell the truth (and let’s face it: he was not lying about the chances of Angel’s and Buffy’s non-existing be-together future) is what makes him a decent Big Bad.
I also loved it that they chose Willow over the box without even arguing (except for Wesley…). It’s what I expect from a “band of brothers“.
And of course the band won’t break up. As usual with these shows (Smallville, Veronica Mars, Gossip Girl) they found a way to keep the gang in town and together.