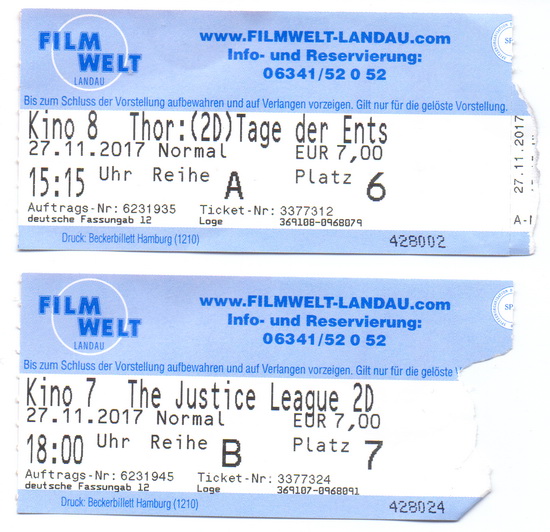 I’m currently on a vacation at home – or as it called now: staycation – and on Monday I had lunch at one of my favourite Italian restaurants (Actually, it’s an Italian deli that also serves warm food and it’s soo good!). Upon driving home in the early afternoon I thought to myself: what now to do with the rest of the afternoon. And it just so happened that I drove past a local movie theatre. So at 3 in the afternoon on a Monday I decided to check out what was playing (I had a decent enough idea going in though). And what have you: At 3.15 an airing of Thor: Ragnarok. And at 6.00 an airing of Justice League. Quick calculation: Is Thor done when JL starts? Probably. OK, so both tickets were bought. Both movies were in German dubbing because watching O-Ton as we call it would have required a bit more planning (not every theatre shows them and only on specific times).

At the Thor airing we were three people in the theatre. A mom with her kid and I. Which is not suprising considering it was the afternoon of a regular workday in week 4 of the movie. Justice League at 6pm was also only watched by six people (including myself) in week 2 at a bit more accessible time.

Then two days later I had also caught up with the episodes of Supergirl, The Flash and Legends of Tomorrow to watch the big crossover event (Arrow being the fourth show to cross). And so I watched Crisis on Earth-X.

And here’s what I thought about all of them:

Plot: Thor’s long-lost sister Hella comes back and wants to destroy Asgard. Thor gets banished to an intergalactice waste disposal and has to find his way back.

That’s one of the issues of the Marvel movies. They are great fun while you watch them (and that’s where and how they make their money) but they are not for the ages. They’re like a good rollercoaster ride. You remember the thrill but you don’t remember the details.

The same will be true for Ragnarok. The villain was once again pretty forgettable and to be perfectly honest not really needed at all for the movie. Because the best parts of the movie took place on the waste planet. Especially all the interactions with Jeff Goldblum’s Grandmaster (Gamemaster? Whatever.).

I did have a problem with the jokes. Not any one in particular, most of them were at least amusing. More with the frequency of them. Sometimes this felt like it tried to be a laugh-track comedy were every sentence had to have a punchline. IMHO, that was a bit too much. In this regard I loved the more sporadic approach of the first movie where he’d just randomly smash his glass after he’d emptied it, praising the brew within.

As for CGI, Marvel has this part down. Although I could have sworn that the Hulk looked different than before, even a bit smaller. This nagged at me for a bit. Also, I noticed that for the sake of the plot the pathway to the Bifröst was changed, especially what’s supposed to be – or not be – under it.

I loved that Thor wised up for once and predicted Loki’s inevitable betrayal. When I saw that scene, the opening scene of Firefly sprung to my mind:

When I saw Karl Urban, I just thought: You’re in this, too? Considering how small his part was, it was astounding – or depressing depending on the point of view – how much more developed his character was in comparison to Hella’s. And at least he had a part to play in comparison to the disposal of the Warriors Three.

All in all it was once again an enjoyable ride but again no deeper meaning to be gained from it.

Plot: Steppenwolf was once defeated by the united tribes of Earth and has now returned to turn Earth into a Hell-like planet. For this he needs to collect three motherboxes that are hidden. Batman assembles a team and resurrects Superman to stop him.

Out of the DCEU I’ve only watched Man of Steel so far. I skipped both Batman v Superman as well as Suicide Squad even though I own both on Blu-ray. I just couldn’t bring myself to watch them – yet.

But moving on. Here’s where the Justice League gets a head start: I’ve known these characters for a while. Having grown up behind the Iron Curtain, I did not read US comics as a child. And while we did watch western television in the 80s in Germany that meant public broadcasting. They did air stuff like The Fall Guy and Riptide but not much beyond that. And then at the end of the 80s private broadcasting started as well as the Wall coming down. In the early 90s while being a young teen I was then exposed to the 60s Batman series, the Superboy series and the 1990’s The Flash. Marvel series like the X-Men also aired on Saturday mornings but then I rather watched Rawhide. Then came 1993’s Lois & Clark and almost a decade later Smallville.

I do love the first two X-Men and the first two Spider-Man movies (Which coincidentally along with Batman Begins and The Dark Knight are about the only superhero movies I can watch over and over again. Not even Deadpool gets that privilege.), but deep down I just know the DC characters better because I’ve followed them for years on the small screen.

That being said: I liked Justice League. From their Smallville outings I even knew who Cyborg and Aquaman were going in. So, to me, any failing to properly introduce these characters went right over my head and I did not notice them. Not watching BvS probably helped in the regard that I never saw what actually happened after Clark’s outing. Here he was already dead and apparently beloved. From what I read this clashes with what actually happened, but since I didn’t see that: Yay for me!

What I did notice was that the villain (which I had not heard of or can’t remember ever seing) was about as forgettable as his counterpart just two hours before. Evil does evil things because Evil is evil. Bleh. There was nothing remarkable about this guy or his minions and the “parts of an artefact are separated and hidden all over the world” as a story has been done to death. It’s even so done to death that in Doctor Who the Master was actually expecting it and Martha and the Doctor could play him because he was expecting it. But at least this time the collecting of the MacGuffins was done by the villain and it was rather quickly over.

Here’s what else I noticed and didn’t notice: I didn’t actually notice Affleck’s weight fluctuations due to the re-shoots. I did notice the digital removal of Cavill’s beard which especially in the flashback photo-op scene looked like this: 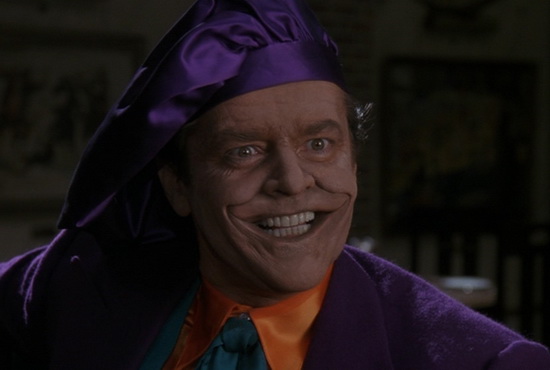 In one of the early scenes when Batman is interrogating the parademon the background skyline looks totally computer generated. I also noticed that parts were filmed in Chicago, as this particular building was visible which was already there in Lois & Clark’s Metropolis days: 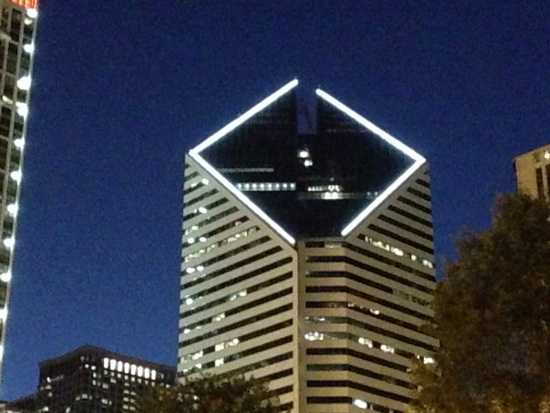 The final battle was once again a CGI slaugherfest that did not stand out in any direction and did not get me emotionally invested at all. This too, has become par for the course of superhero movies and something I’m going to mention in the Crisis review below.

However, what did bother me about this battle was the rescue of the family from the Not-Chernobyl-Site. The Justice League diverted on third of their resources to rescue one family. Here’s the problem: If this diversion of manpower had resulted in their defeat, their rescue would have meant zilch. The family just would have died ten minutes later. I know it’s a superhero staple to recue everyone and their dog. But when your primary objective is to protect your one player (Cyborg) so he can prevent the destruction of the world, it is a really stupid idea to send 40% of the protection squad including your “main tank” to do some side quest. This only worked out because the script said so, not because it was reasonable.

BTW: The plot. Bad guy is defeated by an unlikely alliance in a distant past and an item that brings him power is hidden for generations. Now a new alliance must be forget. That does sound a bit Fellowship-y, does it not?

But all in all, as I said in the beginning, I enjoyed it for what it was. What would a pure Zach Snyder cut look like? Don’t know, don’t care.

This is the first true crossover between all four The CW shows. Last year Supergirl had just changed channels from CBS to The CW and their episode only served as an entry point to the crossover. This year they used something they’ve hinted at in the (back then) cross-station crossover when The CW’s Barry visited CBS’s Kara: An Earth where the Nazis rule.

The multiverse has existed for the long time in the DC universe to explain when certain stories didn’t fit into the narrative of previous stories. The title also reflects the real-world clean-up of these storytelling messes, which were named Crisis on Infinite Earths and Infinite Crisis.

Plot: On Earth-X (aptly named: Erde-X) the roles are reversed. Heroes are villains and vice versa. Evil-Arrow and Evil-Supergirl come to Earth-1 to steal Earth-38’s Supergirl’s heart because Evil-Supergirl is dying. They also bring an army of Nazi soldiers.

It was OK. It wasn’t great. It wasn’t bad either. I’m just not sure why the Xers selected Earth-1 which does not naturally have a Supergirl (not one that has gone public that is). Luck?

The battles were all like old-school Command & Conquer: Red Alert tank rushes. Throw everything that you have at the enemy and wait how it turns out. You just get numb after a while.

The most emotional moment that I had was during Steins death. I actually did not see it coming until the firefight in the hangar. Then it dawned on me. I knew that Victor Garber wanted to leave for Broadway and his departure was prepared for within Legends of Tomorrow. But somehow I was still surprised that they went with the Retirony trope.

But they also should have ended the episodes with his funeral. The West-Allen wedding felt tacked on and even more so did the Olicity wedding. I’ve stopped following Arrow mid-season 3 so I don’t know what’s going on there but it just felt like a weird thing to do.

However what this scene did bring to the forefront was this: A story so concerned with Nazis and everyone expressing how they hate Nazis it was kind of weird that a good chunk of the black characters only had cameos: James Olsen of Erde-X was killed in the beginning. The “real” James did not make an appearance. Joe and Wally West disappeared after the failed wedding and John Diggle was just there to vomit once more and ordain the two impromptu weddings. So in the end the world was defended by good white people against evil white people.

And now back to our regularly scheduled programming after the holidays.