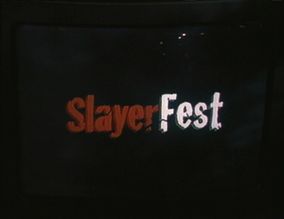 Synopsis: Buffy has decided to run for Homecoming Queen in order to prove that “she’s still got it”. But she runs against Cordy and it won’t be easy since both Willow and Xander are helping Cordy out of a feeling of guilt for kissing one another. But Mr. Trick has also something planned: He creates “SlayerFest ’98”, a hunt where both Humans and demons are the hunters and the Slayers are the hunted.

My Opinion: I liked the assortment of hunters because everyone hunted in his own way (but naturally they all lost), especially the mix of the types “Daniel Boone” and the german high-tech hunters. And I loved it when the “second Slayer” (Cordy) scared the Vampire off just by threatening him. 😀 It’s a talent she will use in Angel again. 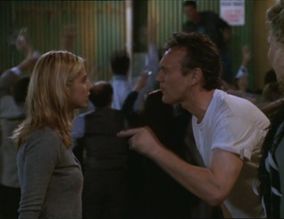 Synopsis: Principal Snyder forces everyone to sell candy bars to finance new uniforms for the school band. But suddenly all the adults start to behave like teenagers and don’t acknowledge their proper age. As it turns out, Ethan Rayne is the producer of the bars – but he’s only a subcontractor for Mr. Trick who works for the mayor now.

My Opinion: Ethan is back and the episode is fun. 🙂 Snyder reminded me a lot of Quark (Star Trek DS9) when he tried to chase after the women and couldn’t be discouraged in any way. And Giles and Joyce were also great in reliving their youth. What we’ve learned so far about the mayor also explains some of the put-it-under-the-rug events of the second season. 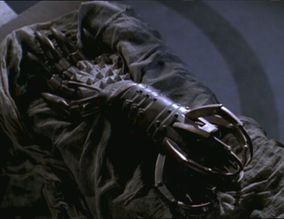 Synopsis: Faith has gotten a new Watcher, a stiff english woman who expects nothing less than the best. And Buffy is still hiding the fact that Angel has returned. And a new demon is in town and he wants the Glove of Myhnegon, a very powerful artefact. In the end, all their paths will cross in Angel’s hideout place. And Xander and Willow have a hard time denying their feelings or refrain from showing affection to each other.

My Opinion: Xander has never really liked Angel, even before he knew that he was a Vampire. But in episodes like this he shows pure hatred towards the guy and except for the Angel-Buffy thing I never understood why his emotions towards Angel are that strong. But it was great to once again see a real Slayer vs. Slayer fight. They both kicked ass! 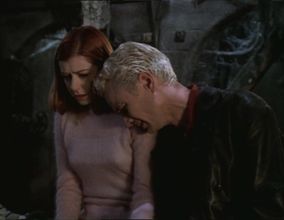 Synopsis: Spike is back in town, but he’s a wreck. Dru has left him for a chaos demon and he wants her back. Buy chance he runs into Willow who is just buying ingredients for an anti-love spell for Xander and her and he considers the general idea of a love spell a good one. So he kidnaps her and Xander and forces her to make one for him and Dru. Meanwhile the rest of the Scooby gang is looking for them.

My Opinion: Spike – Phase II has just begun. First he was the villain, now he will be the comic relief for quite some time. But in the end, he will take his rightful place as one of the heroes. Too bad this will be his only appearance in this season. And from a retrospective POV I liked Xander’s and Willow’s little affair. First of all because it didn’t feel forced, there have been hints towards this since the pilot. And second of all it ultimately leads to the introduction of Anyanka in the next episode. I also liked how Spike could look right through Angel’s and Buffy’s we-are-only-friends charade.