Synopsis: During the last attack Starbuck’s Viper was heavily damaged and she had to eject in the atmosphere of a small moon. But she also shot down the Raider that shot her down and it crashed on a near-by site. The problem is that she has no means of communication, Galactica does not know where to look for her and she’s running out of oxygen in 46 hours. Luckily for her, Adama is not willing to leave her behind.

My Opinion: I love this episode because it showed perfectly the triumvirate Adama²-Starbuck who would do anything for one another and once again Starbuck was awesome. Could you be more cool than return home with a commandeered enemy ship even when you stink like a latrine? But I also liked how the Cylons on Caprica (especially Caprica-Eight) manipulate Helo. Their scheming shows how human they really are.

Synopsis: It is not yet publicly known that Cylons can look like Humans and another Number Five (looks like the reporter Aaron Doral) walks into Galactica and kills himself in a suicide bombing after he was cornered. Adama orders an investigation on how Doral got his hands on explosives and a detonator and the Master-at-Arms discovers that Chief Tyrol is lying about his wherabouts during the time of the bombing which makes him a suspect of treason.

My Opinion: Now the secret is out. This episode reminded me of Star Trek TNG‘s The Drumhead which also featured a witch hunt but here it wasn’t fully believable. Yes she may be the Master-at-Arms and Adama gave her command authorization but she went over the line too quickly for someone who isn’t used to boss Commanders around. 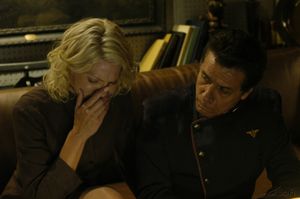 Synopsis: Another Number Six copy with the name Shelly Godfrey comes aboard Galactica and claims that she has evidence that connects Dr. Baltar to the failure of the colonial defences and that in fact he planted a bomb in the defence computer system. Baltar finds this outrageous (he didn’t plant a bomb after all, he just unknowingly slept with the enemy) but he can’t tell anybody that Shelly is a Cylon (Why would he know that?).

My Opinion: Baltar and Head-Six, what a lovely pair. 😉 It was such a great scene when Baltar was in CIC and was introduced to Shelly and he searched for her, totally ignoring the woman standing in front of him – assuming that this was his imaginary Six. 😀 I like Head-Six scenes in general because she gets him in awkward situations where he has to simultaneously* talk to her and the other (real) person in the room. And once again he managed to wind himself out of a tight spot. Even if he isn’t a real villain like the classic Baltar, he’s my favourite villain on the show.

* I wonder if I will ever write that word correctly, spellchecker has to correct me every time…