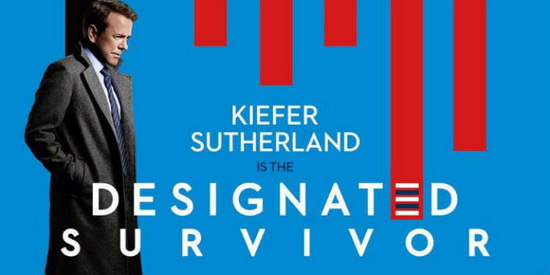 Thomas Kirkman (Kiefer Sutherland, 24) is the U.S. Secretary of Housing and Urban Development and about to be fired since the President has decided to go with someone else for his second term.

Kirkman is also the designated survivor for this year’s State of the Union. He’s kept safe in an undisclosed location while the President gives his speech.

Then the unthinkable happens. An explosion destroys the Capitol building and with it the President, Vice President, the Speaker of the House and most cabinet, house and senate members.

Fortunately, the unthinkable has been thought of. That’s why Kirkman was not in the Capitol. And now he’s sworn in as the next President of the United States.

The most urgent questions on everyone’s mind are “Who did this?” and “Is the pencil pusher Kirkman really able to lead this country in this time of crisis?”.

I’ve learned the term and the meaning behind the “designated survivor” in the first season of The West Wing. This is not going to be that show.

But it’s probably not going to be 24 either. Although with the conspiring already happening, who knows… 😉

I really liked the pilot. Everyone around Kirkman including himself doubts if he can do the job, but he appears to be a fighter. Someone who will tackle every challenge and obstacle that will come his way.

I’m curious how they will design the following years. When will there be re-elections and who will go up against him. How will they tackle the domestic and foreign topics?

This is one show I will definitely watch for the next few years.