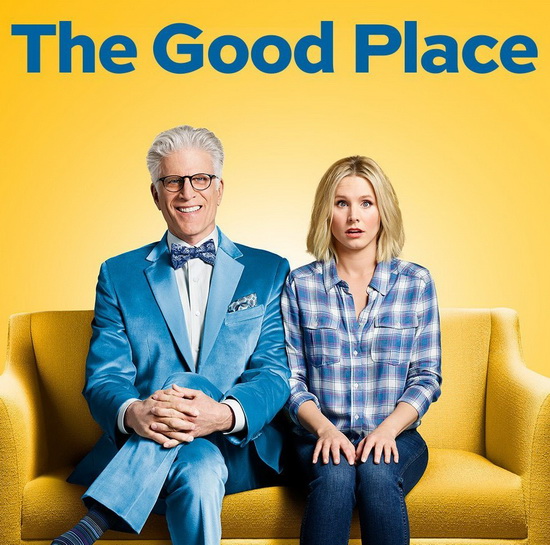 Eleanor Shellstrop (Kristen Bell, Veronica Mars) just died. And now she is in a multiplayer role-playing game on one of the infinite game servers that somewhat resembles the idea of the good version of the afterlife, like the Greek Elysian Fields or the Christian Heaven.

There’s only one catch: They are extremely (and I mean: extremely) picky on who gets in there. Everyone else from Joe(sephine) Average to Adolf Hitler gets send to the “bad place”. And Eleanor does not belong in the “good place”.

She’s just there by accident. Like it or not: The bureaucracy in the afterlife apparently has the accuracy of the U.S. Transportation Security Administration. Eleanor is only in the good place because she shares her name with a really good person.

She’s the glitch in the matrix. The fly in the ointment. The butterfly that causes the storm. Shortly after her arrival, the perfect balance of the good place is shattered and weird things start to happen. And the only way to stop it is for Eleanor to actually become a good person.

I had really high hopes for this show. While I was never a regular viewer of Ted Danson’s Cheers, I did enjoy the episodes of that show. And Kristen WAS Veronica Mars.

And since I’m neither Christian nor of any faith I also have no problems with making fun of any aspect of any religion.

But this was just bland. Even the basic premise was self-contradictory. One the one hand every tiny, minute action or inaction you do in your life is counted in your favour or against you. But then you can just get mixed up with someone else?

And while I do understand the idea that not everyone can get into “heaven”, it’s rather ridiculous that not even Florence Nightingale had made the cut and is basically lumped in together with Genghis Khan and Pol Pot. I agree with Eleanor in this regard. There should be an “ordinary” afterlife for ordinary people if there’s such a high standard for the good place.

There were other problems with this idea as well. I don’t know if it’s going to be explored in future episodes but let me explain it here: According to Whatshisname (Danson) there are 322 people on this instance of the (in lack of better terms) “game server”. 322 people perfectly selected for this group with everyone having a soulmate for eternity. But what if there’s a family of do-gooders? Do they land in the same instance? Can I visit other instances? Is each instance designed for people who died in a certain era, i.e. will people from the middle ages also have a big view screen and a holo helping program?

But the main problem was that it was bland. What are the episodes going to be like? Eleanor screws up differently in each episode due to her narcissism and then tries to fix it by the end of the episode and has learned some Aesop lesson?

Unfortunately, it just wasn’t all that funny and interesting to watch. Also, the woman with the English accent was just annoying. What has she done to deserve to be there and grate on the nerves of her Buddhist “soul mate”?

Nah, I’m good. I prefer to decompose in peace and get blasted across the universe when our sun goes supernova in five billion years.