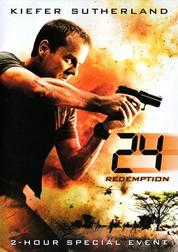 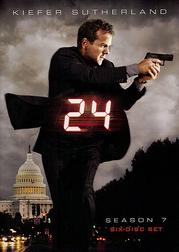 Last weekend I watched the extended version of 24: Redemption and then the seventh season of 24.

The movie while still in “real time” was a nice change of pace with that african location and not having to save the world but just a group of orphans. That was a good idea and well done if you ask me.

The seventh season is a different matter. Don’t get me wrong, I did really like it. It was way better than the fourth and fifth season and I’d say the show has turned upwards again since the beginning of the sixth season.

Let me first describe what I didn’t like and then go to the good parts.

The season had many elements every previous season also had and that makes it somewhat predictable.
First and foremost, nobody trusts Jack and they only get in his way – everybody should know by now that Jack is always right.
Then there’s this huge threat by “the man” that is resolved precisely after 12 hours and is replaced by the threat of “the man behind the man”. So once the big bad is identified you know that he will be dead by half-time and the true evil will appear.
Then there’s Jack’s superior who makes always the wrong or the slow decision and is either killed this season or the next. The only exception to this rule was James Morrison’s character Bill Buchanan who was introduced in the fourth season as Jack’s new boss.
And then there are two conspiracies within the government, one on a political level and one on the personal level in close proximity to the president.

All the above applies also to the seventh season.

But they also made some changes. The two most important are the decommissioning of CTU and to give Jack a new (female) partner.
No one really knows why they did it – after all, CTU saved the day at least six times before, but they did. Bill was retired, Chloe a stay-at-home mom and Jack was on the run. Now he’s back and he has to testify about his actions in front of a Senate hearing – which of course lasts only until the next crisis arises.
Jack only works in an advising capacity with FBI agent Renee Walker who is totally against methods such as torturing that have been used by the CTU and Jack. But this wouldn’t be 24 if that resolution would survive the first contact with the enemy. Still she tries to restrain Jack and is actually getting through to him.
And we have a new president, a woman this time. And I really like her. She reminds me a lot of the late President David Palmer and that’s a good thing in my book.
I also think that this was the first time I liked Kim Bauer and her behaviour. She’s certainly grown as a person.
Another moment that I thought was impressive was when Jack changed his shirt and Renee could see all the scars that he has “collected” over the years and when it dawned to her what he himself endured (the scars the Chinese gave to his hands at the beginning of the sixth season were gone though – I assume it was a make-up decision to “forget” them or he would have to wear them all the time).
And the last thing I’d like to add is the topic of this year’s longest day: That they questioned the reasonability of private army companies like Starckwater and pointed out the danger that they represent.

The seventh season had an end that could have served as series finale but since there will be an eighth sure I am sure that I will tune in.