Skip to content
The Librarian: Quest for the Spear (2004) 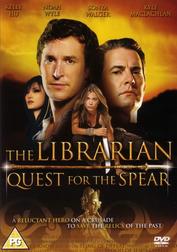 Synopsis: Flynn Carsen is what we call in Germany a “Dauerstudent”, a student who never leaves the comfort of the university – until he’s thrown out. He then gets a mysterious invitation to apply for a job at the library. But not any library, the Library.

The place where they keep the Ark of Covenant, Excalibur, Pandora’s Box – and one third of the Spear of Destiny. Unfortunately that piece is stolen shortly after he started working there and now he has to make sure that the other two thirds that are hidden around the world don’t fall into the hands of the bad guys.

My Opinion: What I expected to see was a poor man’s version of Indiana Jones as a Direct-to-DVD movie. It could have been bad. Luckily for us everyone involved seemed to be aware of the limitations of the budget and the general silliness of the plot so they decided to have fun with it. And that works. I’d qualify this movie in the category of “so bad, it’s funny”.

What comes as an added bonus is that Noah Wyle’s (ER) character is not an Indiana Jones clone, if anything then he’s more of the Henry Jones, sr. kind. 😉
Also starring are Sonya Walger (LOST) as the more action-oriented partner in the duo and Kyle MacLachlan (Dune) as the bad guy.