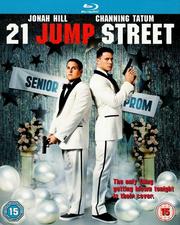 Synopsis: The old 21 Jump Street program was discontinued at some point but someone up there in the hierarchy thought it a good idea to get these old ideas out of the attic.
Schmidt and Jenko went to the same high school but only became friends seven years later when they both joined the police force. And since their first bust goes totally bust and they look the part they get sent to the new 21 Jump Street program.
Back again in high school they learn that a lot has changed since their days and now they have to find the supplier of a new and dangerous drug.

My Opinion: I rarely give up the opportunity to check out a movie remake of a show I loved. And so I had to give this movie at least a chance.
I have to say that I liked it. Knowing one of the main actor’s (Jonah Hill) usual works I knew what to expect when going in and I was pleasantly surprised. The characters worked well together and I got the feeling that Jenko felt as uncomfortable in his new role as did Glee‘s Finn which become especially funny when they blamed Glee on all the changes in high schools.
I also was totally surprised by the cameos of Johnny Depp as Tom Hanson and Peter DeLouise as Doug Penhall. Unfortunately I missed the one of Holly Robinson as Judy Hoffs.