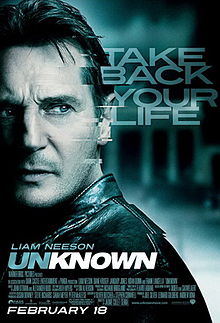 Plot:
Dr. Martin Harris (Neeson) and his wife (Jones) arrive in Berlin to attend a bio-tech conference. He has to return to the airport because he left a briefcase there and his cab has a crash. When he wakes up in the hospital four days later he’s not Dr. Harris anymore. Someone else is Dr. Harris and even his wife doesn’t recognize him anymore. What the hell is going on?

My opinion:
I watched this in the theatre (german dubbing) yesterday. I liked that the whole picture took place in my hometown (Berlin) and that it actually was Berlin (and not just a canadian stand-in ;)). I found it amusing that in the dubbed version the only person speaking with an accent was Gina (Kruger) – a german actress. 😉

When I first saw the character played by Bruno Ganz (I never saw Downfall and didn’t recognize him) I immediately said “I bet he was with the Stasi” (former east-german secret service) and I was proven right that very minute. What I also liked about this character was that he pointed out that the whole plot didn’t make much sense – until the reveal.

The Germans were a bit “too german” sometimes, like when Dr. Harris had to ID himself just to get into the conference room, even though he was on the guest list. The same thing with the cheap hotel just to keep him from getting a place to sleep. And the nurse: “Gretchen Erfurt”. Seriously?

When I saw Langella I also instantly knew that he was the baddie. Except for Superman Returns (Perry White) I can’t remember him not playing a baddie (He was Skeletor AND Nixon!!!).

The plot reveal had his ups and downs, for example
Spoiler (mark to read):
IMHO they didn’t really explain how they knew that these plants where the passwords to the files and why Jones’ character was so hell-bent on stopping the bomb that she risked getting herself blown up.

The other big plot holes I noticed where these:
Spoiler (mark to read):
1) Jones’ character was very cavalier about that briefcase at the airport. That makes sense for her character-in-character, the doctor’s wife, but not her actual character.
2) Neeson’s character inserted that mirror with basically four fingers and yet Jones’ character could not destroy it with a heavy iron thingy.

I found Jones’ character in general rather useless, which is kind of the same way I feel about her Mad Men character Betty Draper.

Everything considered it was an OK movie which I will watch on DVD again, mainly to watch it in english and check how they did the whole english/german mix.