First I thought about a re-run of Smallville but I have watched this in the middle of last year and it’s been a while since I’ve watched Stargate SG-1.

Synopsis: Dr. Jackson is not very renowned in the scientific community. But he is convinced that the great pyramids weren’t build during the fourth dynasty 5,000 years ago. He believes that they are much older. A digging back in 1928 confirms his suspicions: buried in the sands of Egypt under a great cover stone with unknown symbols – not hieroglyphs – the Door to Heaven Stargate was found. The Stargate is an ancient device to open an intergalactic connection to the planet Abydos. Dr. Jackson and Colonel Jack O’Neill (and a group of soldiers) go there. O’Neill’s job is to evaluate the danger of the situation they are facing.

My Opinion: Unfortunately I haven’t seen this movie in the theatres (I went to Star Trek: Generations instead). The idea that alien cultures have been to Earth and have had an influence isn’t new, but it was interestingly presented. I also liked that the Abydosians really spoke abydosian (a variant of ancient egyptian) and not just english. The fights were very well choreographed, too, I didn’t have the feeling that the weapons of the humans were a match to the ones of Ra’s.

To adopt the story for the series they had to make some adjustments (this contains spoilers in regard to the pilot of the series):

Additionally one has to activate one’s “suspension of disbelief” even more than in the movie, because:

Now we can get started … 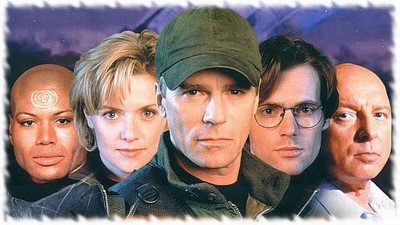