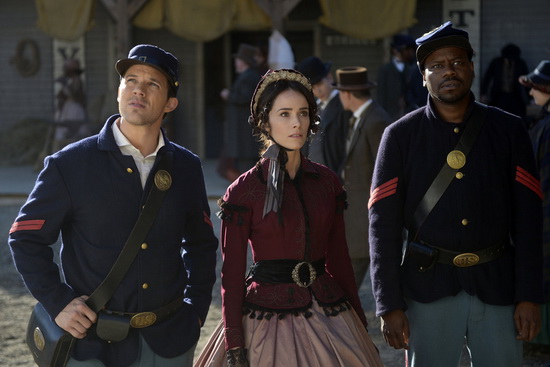 Without the government’s knowledge, a high-tech mogul has built his very own time machine. But then terrorists steal it to change the past.

And now the government is involved. They send back a three-person team to 1937 to prevent the terrorists from accomplishing their mission.

They send a history professor, a soldier and a black computer engineer.

I’m on the fence with this show. The premise does not have any internal consistency and they’re partially self-aware of it by having the black man commenting on it being a bad idea to send someone like him back into any part of American history.

The worst is the time-travel logic which basically does not exist. To explain this you need to have three points of view. Our real world POV A, then the one of the time travelers B1 (bad guys) and B2 (good guys) and the ones left behind C.

The pilot episode revolves around the Hindenberg airship which burned and crashed on May 6, 1937. This is the starting premise for A, B1, B2 and C.

Then the bad guys go into the past. As the end of the pilot episode shows there is no kind of ripple effect as used by Back to Future where changes in the past take a while to have effect on the present. Which means that the moment B1 left for the past, B2 and C (which at that moment are still identical) should already live in the alternate present A’ which differs from our A.

But they don’t. They know Flynn (the bad guy, played by ER‘s Goran Višnjić) went into the past, but their B2/C present is still identical with A. They then went after him and change the past in a slightly different way. When B2 comes back to the present, history actually had changed and the present is now A” and the C group has no idea it ever was A.

Which means when the bad guys go back, the present is not changed, but when the good guys do, it is?!? Sense this makes none.

And that’s not the only problem. They are also greeted back, so even in this alternate present they were sent back to the past.

You can’t think too much about it which means to enjoy the show you’ll have to concentrate on the other aspects. And it’s not getting any easier there either.

The group’s composition is not very well explained either. The historian’s reason for being there is hinted at as a mystery. That I can accept. The soldier on the other hand is not the brightest bulb in the chandelier and there wasn’t actually any explained reason why Rufus (the black man) had to come along. Nothing he did in the past couldn’t have been done by anyone else.

And the show was preachy. It seems as if the only reason Rufus had to come along was to shout at some random stranger that no one cares that O.J. is a murderer and black Michaels are good at sports.

I’ll watch a few more episodes but as a time-travel concept the 90’s shows Quantum Leap and Seven Days did it better.