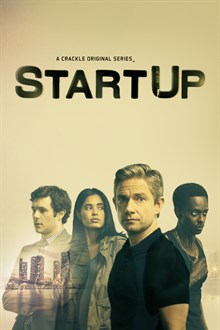 A drug dealer, a hacker and a banker walk into a bar. Well, they don’t actually walk into a bar. But they do meet. This show came only accidentally across my radar so my knowledge of what it’s actually going to be about is a bit sketchy. I can only tell you what happened in the pilot episode and then infer what’s going to happen next.

The banker played by The O.C.‘s Adam Brody doesn’t seem too happy in his job. But he is even less happy when his father walks back into his life and asks him to launder some money for him.

The dad (who has disappeared by the end of the pilot so I don’t know his actual role in the things to come) is a player in the drug trade and was tracked down by a federal agent played by Martin Freeman (Sherlock, The Hobbit). Phil Rask (Freeman) tried to extort the dad which is why he went to his son in the first place.

The money Nick Talman (Brody) is expected to launder belongs to a Haitian drug lord who appears to live by at least some kind of honour and now finds his money gone and is understandably pissed.

The final player is a young woman and hacker (in the classical sense of the word), played by Otmara Marrero. She has developed a new digital currency, far better than Bitcoin per her own words. She’s trying to market it to the bank Talman is working at but they decline the offer. Talman on the other hand is suddenly very interested to invest.

The pilot starts the story rather slowly but since we’re living in the post Breaking Bad age one should not dismiss this as a bad thing. It gives you the idea where the story is heading (drug money transferred around the globe with this new currency system) and you have to decide if the story and the acting is for you. I for one will at least watch a few more episodes to make up my mind.

Maybe the most interesting question this show could ask (don’t know if it will do that though) is how our understanding of and relationship to money has changed.

Money has almost always had only a symbolic value. Sure, back in the days you had gold coins and silver dollars but your trust in the currency always dependent on the fact that there only was so much of it there and that defined its value as a trading object. The minute the money owner (e.g. the state) started to print it by the bucket, the value was gone, see this 200 billion Mark note from 1923 which probably only bought you a loaf of bread.

At some point in the 1900s most currencies left the gold standard and barely anyone batted an eye.

For almost a decade now many western central banks are pumping zero interest money into the markets. There are probably very few people on this planet who still know how much money is currently in circulation. But the prices are reasonably stable.

Heck, in many regards we’ve even abandoned the concept of money as a physical object altogether. I know the U.S. is at least still using “pay checks” but on the other hand even the Starbucks coffee gets paid via credit card. Here in Germany we get our salary transferred into our debit account after which our landlord deducts the rent and the insurance, power and phone companies also automatically collect their bills electronically. You buy something for more than 10 euros, you probably pay with your debit card. 100 euros in cash will keep me afloat for a good two weeks at least. In Sweden they’re debating the abandonment of cash money.

But all of this only works because we’ve developed a trust in the system. But how long is this trust going to hold? And are there better systems? Maybe this show will ask these questions. Or maybe not. Maybe it’s just a variant of Breaking Bad‘s car wash money laundering system. But will find out.