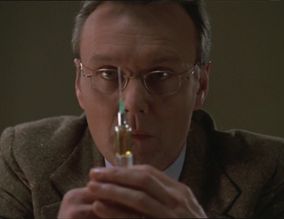 Synopsis: In a few days Buffy will turn 18 and she doesn’t really want to celebrate it due to the fear that it will be a crap-fest again. And she’s right. She has suddenly lost her Slayer powers and is a normal young woman again. The gang investigates in this – with the exception of Giles because it is he who must put her through an ancient and cruel Watcher’s Council ritual.

My Opinion: Between this and the last episode of Buffy I’ve watched, I watched a lot of other stuff, including four seasons of Bones, in which David Boreanaz plays the male lead. So I needed a bit of time to get used to the brooding Angel again. I never really liked the plot of that episode because IMHO it doesn’t make sense. The Slayer is always in constant danger of being killed and the more experienced she gets the better are her chances of survival. So why take the chances of her getting killed in this stupid test when the result would be that you end up with an inexperienced beginner Slayer again?
But I really liked the ending when Buffy wordlessly forgave Giles when Quentin fired him due to his fatherly love for Buffy. 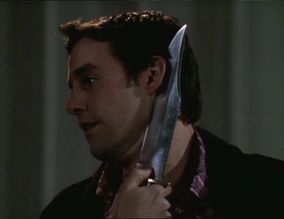 Synopsis: After being pummelled by a demon again, Buffy and Giles seriously advise Xander to stay out of future fights. But without being in the midst of it he feels useless and decides to become the “wheel man”. This doesn’t really work out either and he suddenly finds himself being the driver for a bunch of dead-yet-not-in-the-ground former high school jocks who want to have some fun. 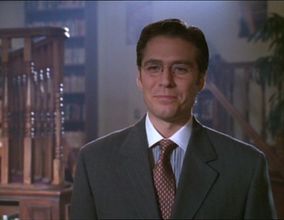 Synopsis: The new Watcher has arrived: Wesley Wyndam-Pryce, a young stiff Englishman on a high horse who isn’t taken seriously by neither Buffy nor Faith. Because both have better things to do: Want. Take. Have. Faith shows Buffy her philosophy of what it means to be a Slayer and together they party and slay and party and break into a weapons store and party … until Faith makes a horrible mistake.

My Opinion: When I saw him enter the library I had a hard time imagining that this man is the husband of Alyson Hannigan and father of her child. It’s just a role, but still… But back to the episode: When I first watched this episode I didn’t know what was going to happen in the end but I was quite certain that something would bring the party crashing down. It was inevitable from the moment they broke into that weapons store. But I didn’t recognize who Faith had killed (Bad with faces, remember?) until it’s explained in the next episode. Still, I liked this episode, Faith and Buffy partying and playing bad girls.

Synopsis: Faith has accidentally killed the Deputy Mayor but she has no intentions of facing the consequences and is trying to cover everything up. When that doesn’t work she tries to blame Buffy who has already a hard time to cope with what had happened. When Wesley gets wind of this he tries to deport Faith back to England which makes matters only worse.

My Opinion: This episode I really, really liked. It was great to see Buffy struggle with her secret and how she tried to convince Faith to come clean and how she sobbed in Willow’s arms. She is a warrior, but she still remains human. I also liked how Xander honestly tried to reconnect with Faith even though he failed. But this is his quality: He does not give up on his friends and one day it will save the world.
What I honestly didn’t understand was Willow’s breakdown in the bathroom. Granted, she had always feelings for Xander, but after Lovers Walk she wanted to get back with Oz and Xander was single again. What did she expect?