So, everyone and their dog has written or made a reaction or review video about the first trailer and then the international trailer of Ghostbusters (2016) a.k.a. “The Female Ghostbusters”.

If you haven’t seen them, here they are:


Pretty much everything was criticised. From the awful jokes (slime in cracks, wigs), the parody-like elements (Yay, finally someone makes fun of The Excorcist, that’s never been done before!) to general criticism of blatant plagiarism (library ghost), being unclear whether it’s a sequel or a reboot, factual errors (they were never four scientists, they were 2.5 at best [Venkman with his parapsychology shtick being the half one]) to having the black woman be the “street smart” non-scientist. Not to mention the Scooby-Doo type CGI ghosts.

So I won’t get into all of that again. Because in the end I will only end up being called a sexist for not liking what I’ve seen so far, because everyone who doesn’t appreciate failed-crowdsurfing-gags is an evil women hater.*
BTW: To prove how devilish a sexist I am, I deliberately made the headline listing only the male actor. *muahahahaha*

So I’m doing something different. I’m watching a featurette about the new Janine a.k.a. Kevin, played by Chris Hemsworth (Thor). This one to be precise:

While Janine was only a minor character, she was never portrayed as dumb. Kevin seems to be just that. He’s the eye candy (something Janine also wasn’t, so score 2:0 for the guy movie) for the women to goggle over. How dumb he is you ask? About this dumb: 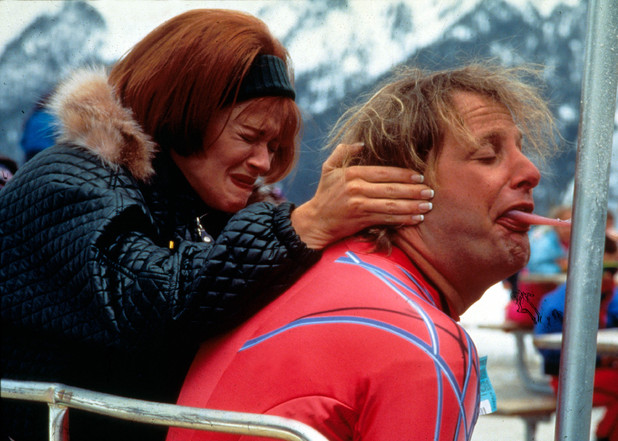 We also get to see more highbrow humour with as well! I haven’t been that intellectually challenged since Not Another Teen Movie!

But to be fair, there was a point that was actually subtle. It wasn’t funny, but at least it wasn’t on-the-nose either. And that’s when Kevin is “mansplaining“. But then again, they’ll probably use the actual term in the movie, taking the subtlety out of it again.

ALL OF THIS IS AWFUL! And these are the “male jokes”!

None of the Hemsworth scenes in this featurette had anything remotely funny in it. I mean he spits back in the coffee and she’ll drinks it anyway. Hooray for feminism!

I’m sorry, I’ll take the actual Janine over this Darwin Award candidate any day of the week!