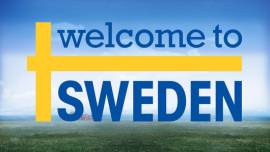 Synopsis: This series is modelled after some of the experiences of Amy Poehler’s (Parks and Recreation) brother Greg.
Here Bruce (Greg Poehler) is an American celebrity accountant who moves to Sweden with his girlfriend to her home country of Sweden and suddenly he is the foreigner in a land with different customs and languages.

My Opinion: Since the US seems to live in the binary system of a show either being a drama or a comedy this falls into the latter category.
It is actually not that funny if you ask me but I still like it nonetheless.
Why? Because you have countless jokes based on “foreigner from country X comes to America” in many different shows and movies but this time it’s the American who has to adapt and learn that life is different in other countries.
It’s a fish out of water story for both the main character and (I assume) the American audience who (like previously established on shows like Heroes) also have to adapt to people actually speaking Swedish half the time (with English subs of course).
I really do like it, I’m just not sure I’d qualify it as a comedy.