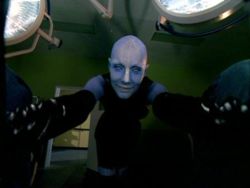 Synopsis: John awakes in a hospital and is told that it’s shortly after he crashed Farscape-1 and blew the experiment. But John is not falling for this again. Still, in the beginning everything is much more realistic than the holo show the Ancients created. But then his shrink is a blue woman that looks suspiciously like Zhaan. Now the question is where is he and what does the person want that keeps him there.

My Opinion: One of these wacky episodes take that place in John’s head and where even more weird things happen than in a usual episode. Funny to see this episode one day after Galactica‘s Six Degrees of Separation with the difference that John ignores Head-Scorpius (or “Harvey”) in his head and Baltar ignored a real Six in the real world. 😀 What I also find really enjoyable, is when these alien characters are placed in a real-world environment. On Moya it all feels natural but when Dargo and Chiana ride a cabriolet on a highway somehow that looks really strange. 😉

Synopsis: In order to hide from the Peacekeepers, Moya has entered a nebula that strongly reduces sensor range and makes it hard to navigate. Aeryn takes a shuttle to take a look at the other side but when she returns she is 165 cycles older and claims to have lived a long and peaceful life on a planet. Then she returns to her granddaughter. But John won’t give up on her and follows her only to get stuck, too. But it’s not them who live in the wrong time frame, it’s the nebula where time stands still and Moya has to get out of there quickly.

My Opinion: Faster aging (at least from the POV of the viewer). Another common theme throughout science-fiction series. I like this kind of episodes, especially when more than one character is involved, even when it’s always undone at the end of the episode. It gives the authors and the characters a chance to undergo a certain developement, to create a relationship that might not be possible under normal circumstances (e.g. when they are both military) or that so far is only an allusion. So yes, that was a good episode.