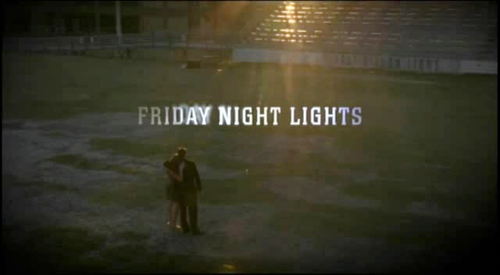 I have now watched 4 seasons of the show and I still have no clue what football is about. For me, it will always be the sport where one guy runs backwards, then throws the ball forwards and afterwards everyone is discussing their next move for 10 minutes. 😉

But even though Friday Night Lights is all about (high school) football, it’s not about football at all.

You know these teen drama shows that all start out in high school and become somewhat to totally unrealistic when the people are leaving for college?

On the one hand that is great because it allows these characters to develop. On the other hand it’s really sad to see them go one by one: Jason, ‘Smash’, Tyra, Matt, Tim and now Landry.

By the end of the first episode of the fifth season all the characters from the pilot are gone – except the adults and Coach Taylor’s daughter Julie but she is soon off to college as well.

So, what’s the show about? Coach Taylor (Kyle Chandler: Early Edition) moves with his wife (Connie Britton: Nashville) and daughter (Aimee Teegarden: Star-Crossed) to the fictional town of Dillon, Texas to coach their high school football team, the Dillon Panthers. But soon these players become like their own children to them and they live with them to all kinds of ups and highs.

So, even if you don’t care for football at all (like me), check out this show from which some people emerged you only heard later from: Scott Porter (Hart of Dixie), Taylor Kitsch (John Carter), Adrianne Palicki (Red Dawn).

I just hope some of them come back for the finale. 🙂