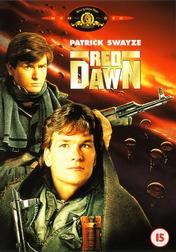 Synopsis: The tides have turned against the United States. Most of the world has fallen to the communist advances and Europe is too tired for a third war in the same century. But the US is still free. Until now.

Nicaraguan/Cuban/Russian forces have invaded the US and already taken large parts of the country. Somewhere there still is a Free America. The small town of Calumet, Colorado is not that lucky.

It suddenly finds himself occupied and people are getting arrested or even killed.

A group of high school students manages to escape into the mountains and from there they try to defend their country in good ol’ Guerrilla warfare manner.

My Opinion: This film is seriously dated. I’ve watched it for the first time, so there wasn’t any nostalgia that could build up over the years.

But 30 years ago, the world was different and people were actually afraid of an all-ending war that would turn Earth into a nuclear wasteland (Nowadays they’re still scared because of a terrorist attack that happened more than 12 years ago and had less than 1/3 of the casualties that traffic accidents caused in the same year, so much so that they’re willing to give up essential freedoms for a little bit of safety.).

The cast list is an interesting composition with Patrick Swayze and Jennifer Grey, three years before they had the time of their lives (pardon the pun) on Dirty Dancing, still-bad-boy Charlie Sheen but also Lea Thompson (Back to the Future or more recently Switched at Birth).

Synopsis: This time the * North Koreans have invaded the US. But the basic story is the same. They invade, the kids flee into the woods and begin their Wolverine resistance group.

My Opinion: Actually, this movie this quite a few things better than the original. Before the invasion the NKs disabled all of America’s high-tech, computer-based weaponry; so there were no predator drones, no spy satellites, no communications network. It went back to the basics.

In the 80s this wouldn’t have been possible, because there weren’t that many computers involved in warfare. So this time around it actually makes a little more sense why this didn’t end in a big nuclear shootout.

Also, it wasn’t a bad idea to give at least one of the guys a background in military training and having been to Iraq he had the knowledge of how insurgence works.

What I also found noteworthy was his comparison to the Viet Cong and the Mujahideen because it at least acknowledged that the VC and others were only doing what these kids are doing now: Defending their own country.

This movie also wasn’t a carbon copy; they deviated from the original material in some ways so it didn’t become completely predictable for someone who had seen the original recently.

And they have black kids now! In the year of Beverly Hills Cop the original didn’t have any memorable black characters in it, not even the obligatory black-dude-that-dies-first. 😉

* Originally the bad guys were supposed to be Chinese but then they also wanted the Chinese market to show this movie, so the bad guys became North Koreans instead.