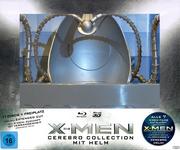 Synopsis: After an assassination attempt on the president himself he authorizes General William Striker to raid Xavier’s School for the Gifted. What he doesn’t know is that Striker has an agenda of his own. The X-Men have to work together with Magneto’s Brotherhood of Mutants to withstand this attack on their very right to exist.

My Opinion: As usual this was the best movie from the trilogy. No – seriously, what is it with comic trilogies and them screwing the pooch with the third part? Spider-Man did it. The X-Men did it. Even this year’s Batman did it.
The cast of this movie series was well chosen. Ian McKellen was a great Magneto, I really liked Halle Berry as Storm and Patrick Stewart made a fantastic Professor X. But you can’t deny the fact that despite being an ensemble cast movie, it might as well been the second Wolverine movie (not counting the actual X-Men Origins: Wolverine movie. But that doesn’t matter, because Hugh Jackman is just so badass.
I never really cared much for Cyclops and Jean Grey but her sacrifice still moved me.